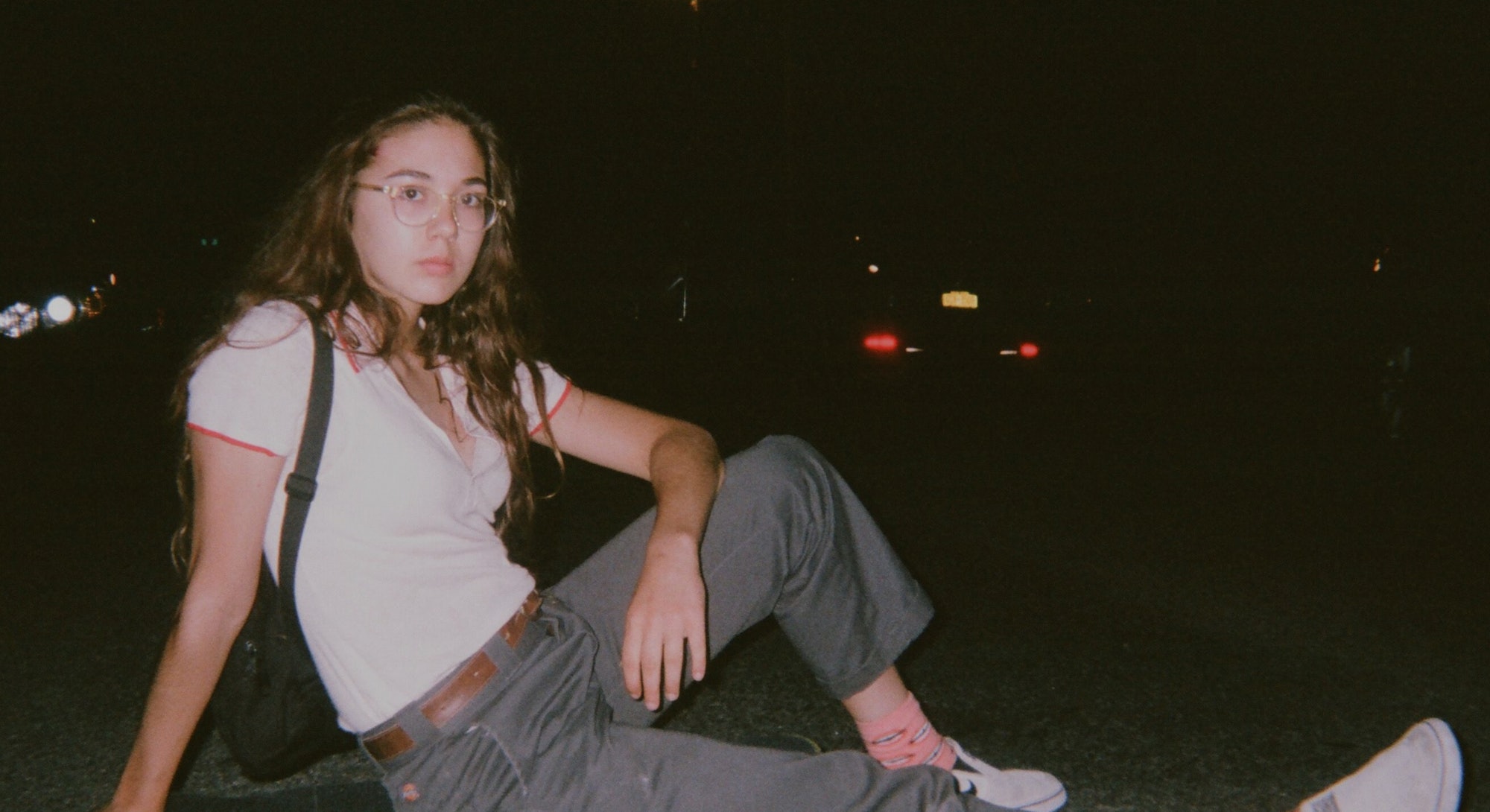 Skateboarder and actress Rachelle Vinberg stars as Camille in the HBO series Betty, which premieres May 1 and centers on a diverse group of young women making their way in the male-dominated New York City skate scene.

Vinberg, 21, lives in Bushwick, Brooklyn, where she’s currently sheltering in place with her roommate, Kabrina “Moonbear” Adams, another of Betty’s stars. Over the course of one week in April, Input checked in daily with Vinberg to see how she’s coping with life in quarantine.

I'm in Brooklyn right now, in my apartment. I’ve been in quarantine since this whole thing started, which is probably almost two months ago. I live with Moonbear, actually – she’s also in Betty. It’s very chill. We both kind of like to just be in our rooms and don’t really have a lot of people over. My boyfriend was here quarantining with us for a little bit, but he went back home.

Today I had a Zoom class because I’m in school. It’s a history of film class. Honestly – I don’t do this for all them – but for this one, you can do this thing where you just don’t put your video or mic on. I just kind of let it sit like I’m there, and I eat my breakfast and watch other videos online. It’s hard to force yourself to pay attention when no one’s watching you.

I’ve been watching a lot of the news, like YouTube videos about coronavirus. I take it pretty seriously. I think it’s real – there’s a lot of people who don’t. I think we just have to do what we can to make sure it doesn’t spread. And I’m scared of it.

I went on a walk yesterday. It’s really hard to breathe with the mask. And my ears kept like getting smushed down. Also, when I’m breathing, I have glasses, so it fogs up the glasses. So pretty much I was walking blindly and couldn’t breathe, but it was still nice to walk and feel my body moving.

Last night, I was hanging out with Moonbear, and we were playing this video game called Friday the 13th. The whole theme of it is like a campsite. And then Jason comes and starts killing everybody. And it’s just funny and scary because he’ll pop up out of nowhere. And so I was, like, screaming. It felt like we were trapped. So it kind of fit.

Betty is coming out in one week, and it feels surreal. It feels very distant right now, because it was filmed last summer. This time of year is really the best time to be in New York as a skateboarder. I’m excited for the show to come out, but it’s making me think about the summer – which I don’t know if we’re going to have.

This morning I skated outside for the first time in a long time. I had to film myself for this other press thing. It felt really good. It’s weird because usually I skate with people. When I was younger, I didn’t skate with anybody because nobody skated where I lived. So this felt like how it used to feel when I was in high school.

Skating alone feels like meditation. Because you’re not talking to anybody. You’re very much in the moment and can’t really think about other things.

Tonight I’m going to watch a movie that Crystal [Moselle], the director of Betty, recommended – Time of the Gypsies by Emir Kusturica. Crystal is awesome. She’s very open to collaborating. All the girls were consultants on the show, so we could really tell her ideas, and they’ll actually happen because she’s not afraid to listen to us.

It’s been really rainy in New York today. I used to like rainy days because it was kind of like a break. I wouldn’t feel bad about not going outside or skating. I wouldn’t feel like I was wasting the day, but now, since we’re stuck inside a lot more, I like when it’s nice out because it’s something to bring the mood up.

“I’ve been thinking about how this is going affect the kids in my generation.”

I’ve been thinking about how this is going affect the kids in my generation. This is supposed to be when we go out into the world and figure ourselves out. But now it’s kind of like everything’s crashed for us. It’s already making me want to just live more. Really say yes to going somewhere – even if I don’t want to go in the moment. And I guess I’ll get more out of meetings with friends, because you don’t know when you’re not going to see them again for a while, or ever.

I’ve just been inside and looking at YouTube videos. One of them was about Grimes breaking down her albums. And I’ve been watching random home videos from the ‘60s and ‘50s. I like looking at that kind of stuff, like Brooklyn in a different time. It’s cool seeing how things change, and how things stay the same. Things seemed more simple back then. Everything looked prettier – the buses, the cars. Everyone dressed really nice, very clean.

I have screenwriting class later. I like screenwriting because I like thinking of an image in your head and then describing it on paper. Seeing it play through like a movie in your head is cool. On Betty, I got to go into the writers’ room and pitch ideas. We got to read the script and change the script. One thing in school that we don’t learn is that it’s okay to throw stuff out and work together. In school, they make it seem way more scary than it is.

It’s really nice out today. So I drank coffee outside on the balcony. And I’m going to probably go outside today and run or something like that. I’m not a big runner at all. But I have nothing else to do.

Last night, I spoke to my friend on the phone for, like, five hours. Talked about life in general. And then we took the Myers-Briggs personality test. I am an INFP-T, according to Myers-Briggs. And she is as well.

“If I don’t get invited to an event, I’ll be like, ‘Dang, you guys didn’t invite me.’ But I usually won’t even go if I’m invited.”

The most accurate part of the test? Oh, definitely being hard on myself. I guess it comes from insecurity and from just wanting to be the best that I can. Oh, another thing: liking people but not liking being around people too much. Ask all the girls — if I don’t get invited to an event, I’ll be like, “Dang, you guys didn’t invite me.” But I usually won’t even go if I’m invited. I just like to be invited.

I made avocado toast this morning. I was hyped about that because I ordered groceries and the avocados they give you are obviously not ripe, so they finally ripened. So I got to have that.

Last night, Moonbear and I got packages in the mail from HBO. I guess it’s like a care package — the thing that they’re sending to people that we know that support the show. It comes with two boards and a sweatshirt and a mini projector. I tried the projector out, and it works really well. We watched some TikToks on it.

I definitely miss New York City. When this is over, I’m going to go to the city and skate around and just soak it all up and enjoy being around people. Because that’s where life really happens. Being inside and alone is really nice, and it’s good to recharge, but the real stuff is with people outside and when you’re free out in the world.