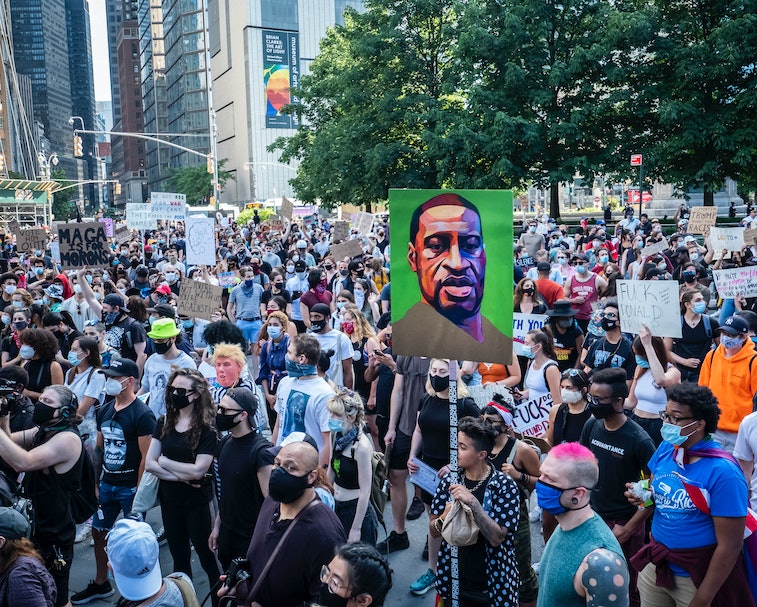 Millions of dollars were raised in recent weeks for a non-profit organization called the "Black Lives Matter Foundation." The only problem? That foundation has nothing to do with the BLM movement and, in fact, has a mission that's at odds with growing demands to defund police. Instead, it proposes bringing communities and police closer together, including possibly having a cup of coffee and a donut with an officer.

As BuzzFeed News found in an in-depth investigation, the Black Lives Matter Foundation may share a name with the mainstream BLM movement, but it's got very different ideas of what ought to be done in the wake of the murder of George Floyd. The tragic event inspired corporations and people around the world to stand in solidarity and support organizations seeking to fight racial injustice. And the Black Lives Matter Foundation was waiting in the wings, already recognized by the IRS as a non-profit since 2015. It raked in at least $4.35 million in the past two months, though thankfully much of that money has been frozen and will now be re-routed to organizations that more accurately represent the goals of those who did the donating.

Don't trust the platforms — Besides the obvious similarity in names — the actual movement itself raises funds through a charity called Thousand Currents — the flood of donations to the wrong organization was also caused by a lack of vetting. In response to questions from BuzzFeed, the crowdfunding platform GoFundMe said that the Black Lives Matter Foundation was allowed onto its platform because it was included in PayPal's own Giving Fund database of IRS-approved non-profits. PayPal hadn't done any scrutiny of the foundation either besides checking its non-profit status.

Everyone trusted someone else along the chain instead of doing any validation themselves.

Thankfully, GoFundMe and other fundraising platforms like Benevity — which hosts fundraisers for employees of Apple and other large companies — say that most of the funds never made it to the Black Lives Matter Foundation. Both companies disperse one big check at the end of the month, so they were able to freeze the funds and either return them to donors or distribute them to other charities.

Trust but verify — The scary part of this story is that BuzzFeed says these fundraising platforms were largely unaware of the mix-up until they were contacted for comment. If they hadn't been alerted by journalists the money might have made its way to someone who thinks he can improve increase support for police with his novel idea of hosting dinners between law enforcement and community members... but who also hasn't actually arranged anything in the five years his organization has existed.

The lesson here is that you cannot trust large platforms to get their hands dirty and research these organizations, especially during recent weeks when events have been developing fast. If you're going to give large sums of money to a non-profit at least do some basic work like checking out its website and Googling it. Because wherever there are good deeds happening there'll also be charlatans and scumbags, looking to take advantage of people's good intentions.