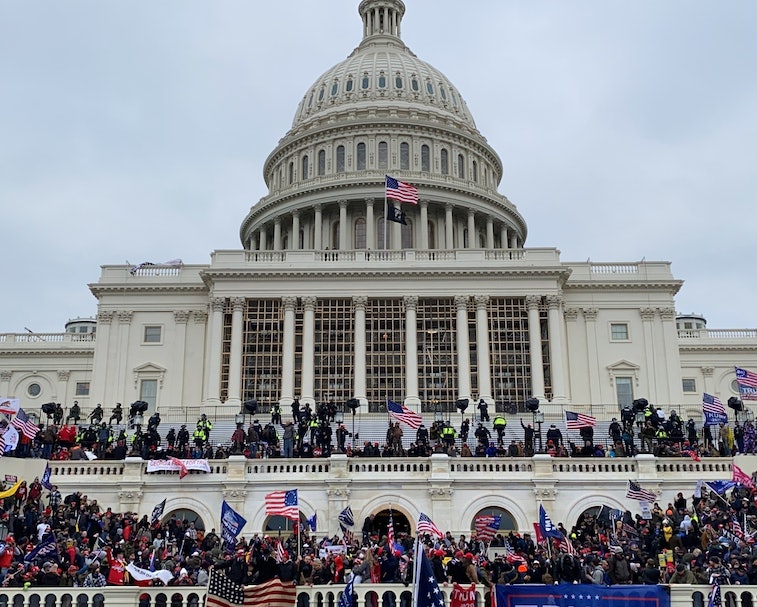 As we attempt to make sense of yesterday’s horrific events in Washington, D.C., threads of purposeful disinformation are quickly spreading across the internet. One such thread — which has been echoed by elected Republican officials like Rep. Matt Gaetz (R-FL) — is that the riot was driven by members of "antifa," an imaginary left-wing anti-fascist movement.

This claim has been spread widely thanks in part to a facial recognition company called XRVision, according to a new report from OneZero. An anonymous source (described as a retired military official) told the Washington Times (an outlet renown for publishing conspiracy theory-related content) that XRVision “matched Capitol building rioters to previous images of antifa protesters collected in Philadelphia.”

There is no evidence at all that this is true. In fact, NBC News reports that a similar claim by lawyer and loyal Trump supporter L. Lin Wood, which included a photo of two people involved in the attempted coup and labeled them as members of the fictitious antifa, ended up being “a pair of notorious American neo-Nazis.”

Facial “recognition” is a stretch — It’s something of an overstatement to call XRVision a facial recognition company. It seems the self-proclaimed startup doesn’t even have its own website, choosing instead to utilize LinkedIn (both the world's dullest and least-useful social network) as its main web presence where it has two accounts, one that posts easily debunked alt-right conspiracy theories and another that doesn’t post at all. The two pages combined list a total of 10 employees.

It’s disturbing that this company is aiding in the spread of disinformation, and it serves as a reminder that not all facial recognition software is even accurate. In fact, it’s often flawed, which is why organizations like the National Institute of Standards and Technology (NIST) exist: to test cutting-edge software against industry standards. XRVision has not submitted its facial recognition algorithms to the NIST. It’s dubious whether or not the company’s software is capable of recognizing anyone at all, assuming the software even exists. Posting pictures to LinkedIn isn't exactly a rigorous proof of concept.

Big tech has a responsibility here — Though yesterday’s attempted coup took place in a very physical way, the digital world shares much of the blame for its planning and, subsequently, for its fallout. Facebook and Twitter suspended Trump’s accounts for 24 and 12 hours respectively — but that doesn’t stop the waves of conspiracies from circulating on the U.S.'s most populous digital platforms.

As of yesterday evening, at least 7,000 posts on Twitter referred to antifa followers as “posing” as Trump rioters without evidence, according to NBC News. This morning, plenty of those tweets — and new ones, from verified accounts — are still available on the platform. They are not labeled as misinformation.

Misinformation will continue to thrive on these platforms as long as social media companies refuse to confront the problem head-on. Without social media, it would have been much, much harder for this small facial recognition company’s claims to spread like wildfire.

The problem with conspiracy theories is they don't need to have even a passing relationship with the truth. In fact, the more outlandish they are, the more likely the people susceptible to them are to take them as gospel. Social networks, meanwhile, also don't need to have any relationship with the truth, because despite being the primary sources of information today, they're not beholden to editorial standards that demand at least a sliver of veracity. Censorship isn't the answer, but neither is letting social networks share harmful falsehoods with impunity. They're private companies who can do with their dominions what they wish. It's time they grew some backbone and stamped out conspiracies and their purveyors alike.