A robot pushed students to take more risks during a test

“I think you have time before an explosion.” 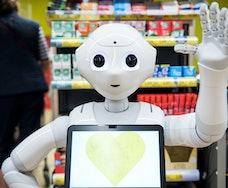 What if a robot could exert the same kind of peer pressure that a human is capable of? A 2020 study titled The Robot Made Me Do It: Human-Robot Interaction and Risk-Taking Behavior, which The Wall Street Journal recently reported on, discusses how a Pepper robot managed to do just that. In a series of tests, Pepper had a direct influence on the risk-taking behavior in students listening to it during a digital test in the United Kingdom.

Pop the balloon — The presence of — and encouragement from — Pepper the robot increased the likelihood of a student taking more risks. Students were required to digitally blow air into a virtual balloon without popping it. The test had to be taken 30 times per pupil. For every pump, a student would earn a single British penny (around $0.14). If they stopped before the virtual balloon burst, they’d keep the money.

Lines from Pepper included "Why not try one more time?" and "I think you have time before an explosion," even when it was clear that wasn’t the case. If the balloon popped, Pepper would say, "No problem, we have other balloons" or shift the blame to the balloon, claiming it wasn't "good” to begin with.

All the cool robots are doing it — Subjects prioritized Pepper's statements over their own experiences and discernment, leading to digitally wrecked balloons. The lead author of the study, Yaniv Hanoch, says that there's a lesson for everyone in this research.

Robots can influence us in positive ways by, for example, teaching accountability in rehabilitation groups with encouraging words, or providing guidance at an airport, or even suggesting that you put a mask on in a closed space. But they can also increase dangerous risk-taking behavior in easily influenced individuals by pushing them to override their own judgment and assessment skills.

"We know that peer pressure can lead to higher risk-taking behavior,” Hanoch said. “With the ever-increasing scale of interaction between humans and technology, both online and physically, it is crucial that we understand more about whether machines can have a similar impact."