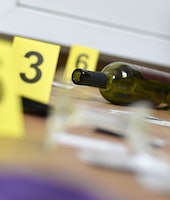 Airbnb has long played host (get it?) to myriad ethical and socio-political issues, but some of the worst, most horrific problems apparently rarely, if ever, see the light of day thanks to a secretive crisis management team specifically tasked with cleaning up and / or hiding the massively successful travel company’s dirtiest laundry... Sorry, it’s just that puns are the only way we know how to cope with Bloomberg Businessweek’s new deep dive into Airbnb’s multimillion-dollar “black box” operatives handling the worst humanity has to offer.

With members at times including the likes of a former CIA deputy chief of staff and National Security Council adviser for Obama, Airbnb’s black box safety team has quickly moved to put out the (sometimes literal) fires that are inevitable given the millions of hosts and users relying on the app and website each year. Often these resolutions involve hush-money payments that cost the company an average of $50 million annually.

The whole read is pretty harrowing stuff, although Airbnb maintains that less than 0.1% of stays end up with “reported safety issues” a fraction of which are forwarded to the black box team. But, as Bloomberg Businessweek points out, “with more than 200 million bookings a year, that’s still a lot of trips with bad endings.” By “a lot,” they mean roughly 2,000...

Detailed numbers are hard to pin down — Airbnb is far from the only company dealing with these issues, but due to the way police reports are generally filed, it's unfortunately difficult to accurately track which short-term rentals companies have the most incident reports. What’s more, it’s nearly impossible to determine whether the short-term rentals that cops responded were actually being rented out at the time of the issue, thus “making it difficult to draw useful conclusions about the correlation between the short-term rental industry and crime.”

Safety teams are the least they can provide — Despite the nearly limitless budget offered to safety team members, the aggressively secretive nature of how Airbnb handles its most severe crimes and incidents prevents lawmakers and customers from getting a full picture. And, as short-term rental companies face increasing scrutiny and financial oversight, it’s unlikely these kinds of “black boxes” will become easily accessible anytime soon.