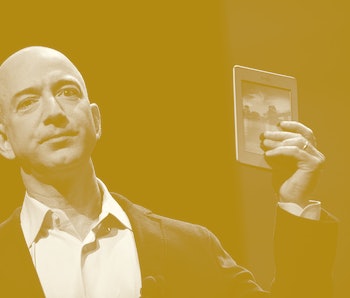 Amazon is launching a new publishing market for serialized fiction. Called Kindle Vella, the platform allows readers to purchase stories one piece at a time. The service is available now in the United States, with plans to expand to the rest of the world in the near future.

On Vella, readers will be able to view the first three “episodes” (600 to 5,000 words each) of any given story for free — a preview of sorts to pique their interest. Vella users can then purchase “tokens” to unlock more episodes. Tokens start at about $2 for 200, while readers can save some cash by buying in bulk; right now 1700 tokens is just $15, for example. A single token is worth 100 words, so the exact number of episodes you’ll get out of your money varies greatly on a story-by-story basis.

Right now Vella is only available on the Kindle iOS app and via web browser. It’s sure to be popular, given Amazon’s overwhelming domination of the e-reading market. And thus that domination continues unchecked.

Stepping all over Wattpad — Serialized fiction is nothing new; that’s how Charles Dickens got his start, after all. The concept of publishing fiction little-by-little on the internet is commonplace at this point, too. Wattpad is the best-known place for authors to publish serialized work and connect with audiences, but plenty of smaller sites exist on the same model, and there are thriving communities showing writers how to get started with it on forums like Reddit.

Authors have long used Amazon’s own Kindle Direct Publishing (KDP) to publish shorter fiction as well. Given Amazon’s enormous readership, KDP is largely considered the quickest way to get eyes on your fiction without going through a traditional publishing house.

Another lock on the cell — One of Amazon’s favorite activities is locking people into its ecosystem — both creators and consumers end up on the short end of this bargain.

One of the biggest caveats with Vella is that authors aren’t allowed to bring previously published books or long-form content to Amazon; they can only start fresh with the platform. Writers will receive 50 percent of the revenue brought in by their stories — which is more than traditional KDP allows for — but that still means Amazon is taking a hefty 50 percent of the profits for itself.

Amazon doesn’t exactly require exclusivity, but its IP rules are pretty strict. If you want to ever republish your Vella episodes in a longer format, you’d better be ready to jump through some hoops. Books or other long-form content containing republished Vella content has to contain a minimum of 10 episodes, and episodes can only ever be republished in one place.

With Vella, Amazon comes one step closer to total book market domination. It’s authors and readers who end up with the short end of that bargain.