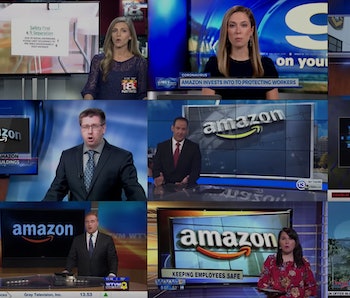 Amazon's COVID-19 response has been a disaster, to put it lightly. At least eight Amazon warehouse workers have died due to the coronavirus while the company's former vice president stepped down from his position after slamming the executive response to protests led by worried warehouse employees. Now, according to multiple journalists on Twitter, Amazon is promoting a heavily pre-edited script for news stations, which unmistakably runs a positive spin on its otherwise abysmal COVID-19 record.

It is such a surreal spectacle that Courier Newsroom (which coincidentally, as Guardian's Julia Carrie Wong pointed out, is the "pseudo-news" outlet related to the infamous Iowa caucus app) uploaded a YouTube clip showing almost ten news stations reciting the script at once. It's clear that Jeff Bezos, who happens to be the richest man on Earth, is attempting to do some damage control through meaty PR soundbites like claiming Amazon spent $800 million for a wage increase and added 175,000 more associates to its workforce. Unfortunately for him, it's all backfired.

The self-praising safety script — The script, which can be read here, instructs the news anchor to start off with a passionate sounding intro: "Millions of Americans staying at home are relying on Amazon to deliver essentials like groceries and cleaning products during the COVID-19 outbreak."

"For the first time," the news anchor is then guided to add, "we're getting a glimpse inside Amazon's fulfillment centers to see just how the company is keeping its employees safe and healthy while still delivering to your doorstep." It's far less of an objective news report and more of a pro-Amazon commercial. In fact, here's a news station close to Milwaukee running a slightly paraphrased version of the same script:

No self-respecting station will run this — Journalists have since condemned the script on social media. Reporter A. J. Bayatpour tweeted forceful criticism against the self-extolling script, saying that "more than 30 of [Amazon's] workers have gotten COVID-19 in Kenosha and it refuses to cooperate with the local health department." Despite repeated calls for limiting or simply pausing its warehouse activity to mitigate the coronavirus spread, Amazon has sent "this pre-packaged trash," Bayatpour tweeted.

Take a look at how surreal it all sounds when multiple news stations recite the script together.

People won't forget — In addition to several of its workers dying because of COVID-19, Amazon has cracked down on protesting workers and shown undeniable sluggishness toward the notion of paid leave for vulnerable employees. This script is another grim episode in its ongoing fiasco-of-a-response to the COVID-19 outbreak. It wouldn't hurt to find out how much these stations were paid to run this hackneyed commercial in efforts to sweeten Amazon's image up.