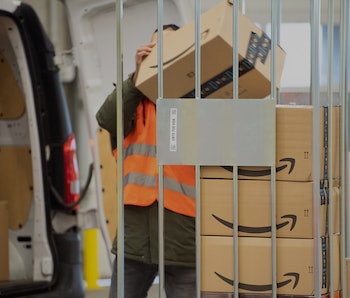 Amazon has been tracking Americans' usage of opioids like fentanyl and creating a massive database, a project that's as unsettling as its reasons are unclear. According to opioid and drug data specialists, the revelation isn't too shocking, but it's still plenty worrisome for both consumers and employees. Is Amazon just collecting data in case it later proves useful? Does it want to become the go-to place for opioids? Or is there something else going on?

Data visualization to track "perceived threats"— According to an internal document received by Motherboard, Amazon's opioid tracking is being conducted via a project known as "SPOC" (geoSPatial Operating Console), which the retail giant uses for mapping data points including crime rates, weather patterns, and political situations to better keep tabs on perceived "threats to the company."

Amazon's explicit reasons for deciding to track something like opioid usage aren't known at the moment, but experts and analysts hypothesize the company could be doing so in order to better assess potential locations for future warehouses, adjust the frequency of employee drug tests, and investigate regions particularly susceptible to package theft and other retail crimes.

Experts, however, warn that Amazon's potential conflation of addiction and drug usage with crime rates is misguided, ill-informed, and potentially racist. "There may be an assumption that addiction rates are correlated with package theft at the point of delivery. There's been some chatter about this, especially on NextDoor and Ring networks. Addiction rates and opioid use should not be conflated but they often are," Leo Beletsky, a professor of law and health science at Northeastern University, told Motherboard.

Data for data's sake— A somewhat less sinister, if still troubling, explanation offered by an epidemiologist at the University of North Caroline at Chapel Hill, Nabarun Dasgupta, is that opioid usage info is simply yet another data point Amazon hopes to harvest to have on file for future potential use. "It's just another data point people want. This is just one small drop in a big data bucket," Dasgupta said.

While no,t surprising the news that Amazon is prying into a particularly private and sensitive aspect of the public health is unlikely to go over well with an already wary consumer market and government officials currently looking into Big Tech's potential (read: obvious and blatant) antitrust violations. Instead of meticulously tracking drug usage for potentially classist and racist reasons, Amazon might want to switch to investigating the reasons why its warehouse worker injury rates are more than double the industry standard. Or, perhaps, stop pushing Orwellian nightmare products like its Ring home drones on consumers.