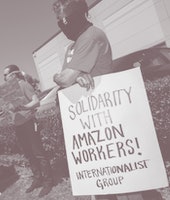 The number of employees Amazon has in the U.S.

Amazon's workforce employs some 1,372,000 people in the United States. It's the second biggest employer after Walmart. But, unlike Walmart, which provides up to three hours of paid time off to its staff so they can vote, Amazon's not making it easier for its labor force to participate in what's arguably an even more important election than 2016's. Amazon workers can apply for time off, but won't be compensated for it, meaning many will likely be forced to forgo voting.

According to NBC News, Amazon workers have signed an internal petition at the company that demands time off so that they may cast their votes on or before Election Day. The news outlet reports that 3,243 Amazon tech employees signed the petition earlier this week.

Workers hosted the petition on Amazon's internal ticketing system. Normally, this system is used for logging pending and completed tasks and requests for internal improvements but on Tuesday, it became a rallying cry for employees' right to vote.

We are less than a month away from the 2020 United States election. I strongly urge the company to provide the entire US employee workforce with a paid day/shift off that can be used anytime between now and Election Day on November 3. [...] This additional day/shift off must be available to all employees every year.

Workers have signaled their support for the petition by posting "+1" beneath the ticket in question.

What Amazon says — Amazon has defended itself against the negative press the petition has accrued, which is an added task as the company already is under fire for its treatment of warehouse workers in the face of the COVID-19 pandemic. The company's spokesperson Jaci Anderson told NBC:

In all 47 states with in person voting, employees that lack adequate time before or after their scheduled workday to vote, can request and be provided excused time off. The number of hours and pay provided to employees varies by state in line with local laws.

This is clearly not enough. Amazon could do well by learning a thing or two from Pinterest, which has offered eight hours of paid time (a full workday) to its workers to vote or help out at polling stations.

No surprises — Shortly after the COVID-19 pandemic began, Amazon workers demanded safe working conditions only to face retribution and smear campaigns from the company. Some of Amazon's warehouse workers have died due to the coronavirus, and the company's handling of workers vulnerable to the virus was so stunningly poor that it eventually admitted that more than 19,000 of its employees have contracted the virus. Its official response to calls to make it easier for staff to vote is similarly — and unsurprisingly — disappointing.