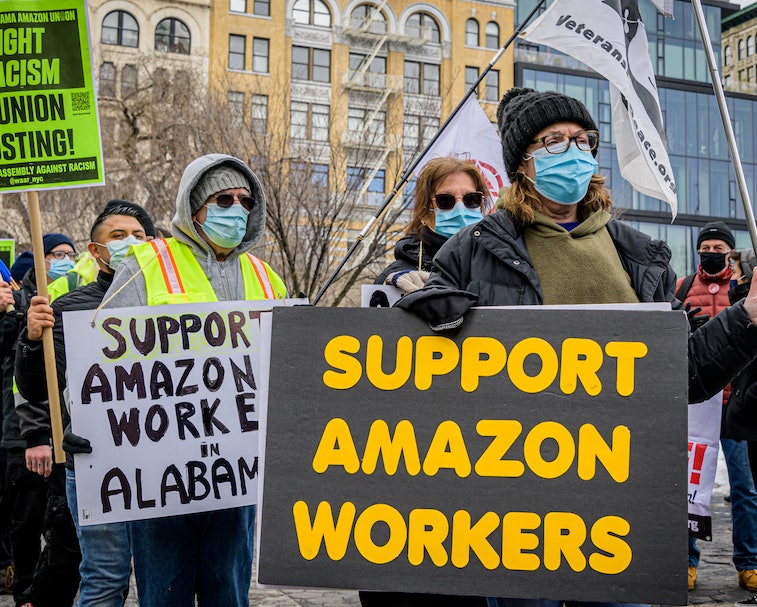 Amazon workers in Bessemer, Alabama, are reportedly receiving anti-union propaganda mail from their employer ahead of a historic union vote that could have lasting effects on the corporation's thousands of employees, not to mention the tech industry at large. Amazon's "Vote NO" leaflets also include a number of misleading statements regarding union dues and job security, which isn't terribly surprising.

What is more striking is the recent installation of a USPS mailbox only a few feet from the Alabama warehouse's entrance and exit doors. Oh, and Bezos is sending out anti-union texts mentioning a spurious, implied March 1 mail-in deadline, despite the campaign actually lasting until March 29. All of this is fine and normal.

Strike-breaking in the era of COVID-19 — While the push for unionization of Amazon's various workforces comes after months of buildup, not to mention similar fights undertaken by workers for other tech giants like Google, the inclusion of seemingly strategic USPS mailbox placements is a new, (albeit begrudgingly creative) strike-breaking method. As reported by Motherboard, many Amazon employees feel the company's choice of an implicitly surveilled location near its warehouse entrance is meant to intimidate workers from casting their ballots by mail, a vital alternative given the current COVID-19 pandemic.

"I feel like they’re doing it so they can monitor us and gauge how many people are using the mailbox. I talked to workers and they say this box is making them feel rushed to make a decision," a warehouse worker told Motherboard.

A last-ditch effort from Amazon — One of the main reasons Amazon is so aggressively pushing to stymie mail-in voting is the simple fact that, historically and legally speaking, companies are required to cease all education meetings while unions can continue their own pushes until the very end of a voting window. In this case, Bessemer warehouse workers still have a full seven weeks in which they are allowed to cast their ballot for or against unionization... which is probably why the aforementioned text messages heavily (and inaccurately) suggest a March 1 deadline for voting.

Plenty of misinformation — Apart from the wrong deadline date, Amazon's "Vote No" leaflets also make a number of well-worn, inaccurate claims such as "a union cannot guarantee greater job security or better wages or benefits," along with "you pay for the union with dues they collect from your paycheck each month." All of this is, to put it lightly, horse shit. In actuality, unionized employees earn 11 percent more on average than their non-unionized equals, and because of Alabama's "Right to Work" laws, any union member there is allowed to voluntarily opt-in or -out of the dues system. The bottom line here is that Amazon's treatment of workers is as trashy as its anti-union leaflets that are destined for the landfill.