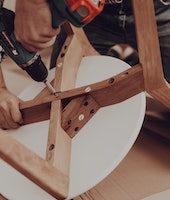 Rate at which online furniture sales grew during the pandemic.

A year’s worth of pandemic-induced stay-at-home life has been a boon for the furniture industry. According to Coresight Sales, online purchases of items like chairs, beds, couches, and tables in 2020 jumped a massive 41 percent over the previous year. While that number is certainly set to decrease in the coming months, it’s still a massive market for home furnishing e-tailers like Wayfair, Best Buy, Home Depot, and Lowe’s. Of course, “massive markets” are sort of Amazon’s whole M.O., so it should be no surprise it’s reportedly coming for its chief competition.

Amazon has set its insatiable maw towards in-home assembly, and is testing out a new premium service allowing customers to have their furniture constructed for them upon delivery. As Bloomberg noted earlier today, “The surge in demand for big items created delivery logjams and weeks-long delays, creating an opportunity for Amazon to bring its reputation for quick delivery to the sale of bigger items like furniture.”

The All-Consuming Bezos Baby™ will not rest until it has laid its grubby hands on every single item in your household.

But think of all the styrofoam you won’t have to clean — While Amazon hasn’t confirmed it’s experimenting with the new delivery offering, anonymous sources told Bloomberg the company will soon roll out the option for the state of Virginia and “two other markets.”

“The new service requires drivers to unpack and assemble the items, remove the packaging and take the item back on the spot if the customer isn’t satisfied,” reports Bloomberg. As terrible a company Amazon is (and boy howdy, is it terrible), we will begrudgingly admit we’d love for someone else to clean up all those little bits of styrofoam stuck to our out-of-box coffee table parts before our pets eat them.

Plans to train workers on larger projects — An internal training video reportedly also shows delivery and assembly of simple items like a “bed and mattress set, as well as a sofa and ottoman,” but there are additional rumors Amazon could up the complexity of the new service’s offerings to include large appliance installations. Competitors like Home Depot and Lowe’s both currently offer similar services for purchases like washing machines and ovens.

No word on whether in-home assembly workers will be subjected to the same invasive monitoring techniques as other Prime drivers, but we’re willing to take a bet on the answer to that one.