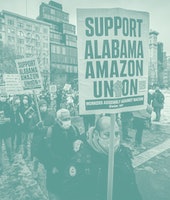 Amazon is terrified of workers’ recent unionization efforts, and is willing to open up their wallets to derail growing labor momentum. According to recent financial filings with the U.S. Department of Labor and detailed by The Huffington Post, the world’s third largest company spent roughly $4.3 million last year on consultants dedicated solely to union busting in warehouse locations like Bessemer, Alabama, and Staten Island, New York. In some cases, Amazon’s hired help were paid upwards of $3,200 per day.

Money talks — So what did Amazon get for that kind of cash? “Many employers hire anti-union consultants to hold meetings with workers and dissuade them from unionizing, but none seem to match the scale or price tag of Amazon’s efforts over the course of just one year in its sprawling warehouses,” explains Huffington Post. For that amount of money, Amazon warehouse workers were subjected to weekly visits from consultants and mandatory anti-union “information” sessions.

Unprecedented spending — An Economic Policy Institute study from 2020 revealed that only a small number of companies ever actually spend more than $1 million on anti-union campaigns for its workers — what’s more, in those instances it usually takes multiple years to reach that number, making Amazon’s receipts even more shocking.

Turns out even that kind of money can’t even dissuade labor movements.