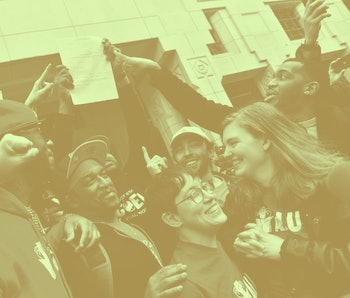 Amazon warehouse workers in Staten Island made history earlier this month by overwhelmingly voting to unionizing their workforce — a potentially transformative and energizing moment in the American labor movement. Jeff Bezos and his union-busting cronies, of course, were far from pleased and quickly vowed to challenge the outcome, citing potentially illegal tactics utilized by organizers and the National Labor Relations Board. Although no evidence was offered at the time to support this, I surmised that Amazon’s legal team would soon “be sure to concoct some sort of reasoning behind it,” and boy-howdy, did they not disappoint:

You see, little did we all know that some warehouse workers potentially smoked the reefer before casting their 2,654 “pro” ballots versus the 2,131 “against” votes earlier this month. Gasp!

Marijuana usage has been legal for New York residents aged 21 and older since last year, by the way.

Gonna need to try harder — As reported by Business Insider and elsewhere, Amazon lawyers claim that union organizers “distributed cannabis to workers ahead of the vote,” while adding that the NLRB “cannot condone such a practice as a legitimate method of obtaining support for a labor organization.” In response, a lawyer for the Amazon Labor Union told the Associated Press that offering cannabis was "no different than distributing free t-shirts and it certainly did not act to interfere with the election."

Seriously, that’s the best Amazon’s got right now? Some people legally took a toke before casting a “Yes” or “No” vote? This is the opening strategy Bezos’ lawyers offered in hopes of calling the new union into question? Good luck with that.

Can’t stop the momentum — Even if somehow Amazon managed to convince courts to hold a union vote recount, it won’t stop this month’s much-needed jolt to the labor movement. Already workers at multiple other Amazon warehouse locations, as well as laborers in other major business sectors, are using the momentum to begin organizing their own locations. If this is all Amazon can muster to discourage their workforce, then keep on with the Reefer Madness tactics, by all means.