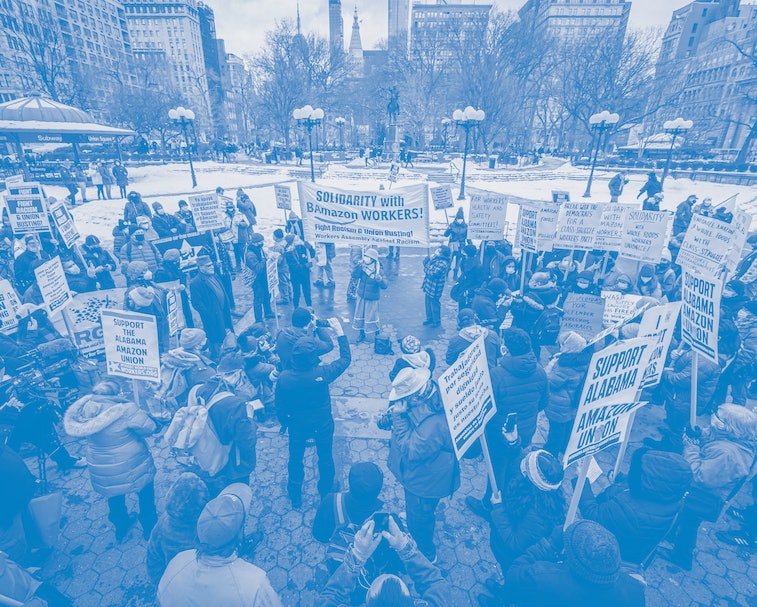 Workers at Amazon’s largest New York City warehouse, along with three others in the area, have announced plans to file for a union election. More than 2,000 employees from the Staten Island warehouses have already signed union authorization cards, while at least 100 employees have joined a worker’s committee.

This is the second time this year Amazon employees have tried to unionize. In April, Amazon crushed a burgeoning union in Bessemer, Alabama by deploying aggressive anti-union tactics.

The Staten Island employees are taking a slightly different route to unionization. Rather than working through an existing workers’ union — Bessemer employees used the Retail, Wholesale, and Department Store Union — NYC workers are building their union from scratch.

"We intend to fight for higher wages, job security, safer working conditions, more paid time off, better medical leave options, and longer breaks," the union wrote in a press release. "This is truly a remarkable historical moment for all Amazon workers all over the country.

An infamous leader — The Amazon Labor Union will be led by none other than Christian Smalls, a warehouse worker who made headlines last March for organizing a walk-out protest at a Staten Island warehouse. At the time, Amazon claimed Smalls was fired for failing to comply with prescribed self-quarantine measures.

Then an internal memo containing notes from an executive meeting attended by then-CEO Jeff Bezos leaked. The memo reported that Smalls is “not smart or articulate.” General counsel David Zopolsky also urged those present to make an example of Smalls, both in terms of worker conduct and the entire union movement.

Smalls says having organizers inside the company is giving them an advantage. They can use internal communications tools to reach out to employees and garner support; workers supporting the union have worn shirts and masks to the warehouse with the union’s logo and left pamphlets in the break room.

In for a bumpy ride — Amazon is, as you might expect, not happy with this latest unionization effort. A company spokesperson said that Amazon doesn’t think unions are the best answer for its employees.

“Every day we empower people to find ways to improve their jobs, and when they do that we want to make those changes — quickly,” the spokesperson said. “That type of continuous improvement is harder to do quickly and nimbly with unions in the middle.”

The union will face steep obstacles before being recognized by Amazon. First, the National Labor Relations Board will need to accept the union’s request for a vote; then the union will need to gather enough support to bring a majority vote to Amazon. And you can be sure Amazon will use every underhanded trick in the book to ensure that vote never makes a majority.