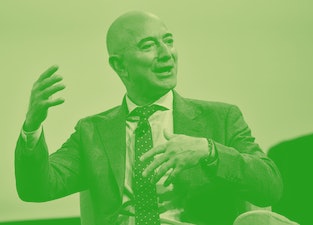 Amazon released its fourth-quarter earnings for 2019, and the stock has jumped more than 11 percent in after-hours trading. If these numbers hold through market opening Friday morning, they will put the company back over $1 trillion in market cap, reuniting it with its big tech rivals Microsoft, Apple, and Alphabet.

Bezos highlights Prime membership — In the company’s earnings release, CEO Jeff Bezos said: “more people joined Prime this quarter than ever before.” Amazon has racked up an incredible 150 million Prime users around the world.

It’s been a fairly long time since Amazon released concrete numbers on its Prime membership. In April 2018, Bezos announced that 100 million people had joined Prime. That’s a 50 percent increase in just a year and a half.

Bezos also spoke to Prime’s same-day delivery and two-hour grocery delivery from Amazon Fresh and Whole Foods. The latter — which still brought in $4.4 billion in sales — actually dropped 1 percent during the last quarter of the year.

A strong end of year for the $1T Club — Amazon wasn't the only company to report strong earnings from the end of last year. On January 28th, Apple announced record quarterly earnings per share that were up 19 percent from the same period a year ago and on January 29th, Microsoft announced diluted earnings per share were up 40 percent. Alphabet will announce its fourth-quarter results on February 3rd.

And a high bar for the future — The fourth-quarter report makes some hefty predictions about where Amazon’s business will go in 2020. The company expects its net sales to be between $69 billion and $73 billion, growth of between 16 percent and 22 percent over the first quarter of 2019.

Amazon was sure to issue a warning with the predictions: “These forward-looking statements are inherently difficult to predict.”