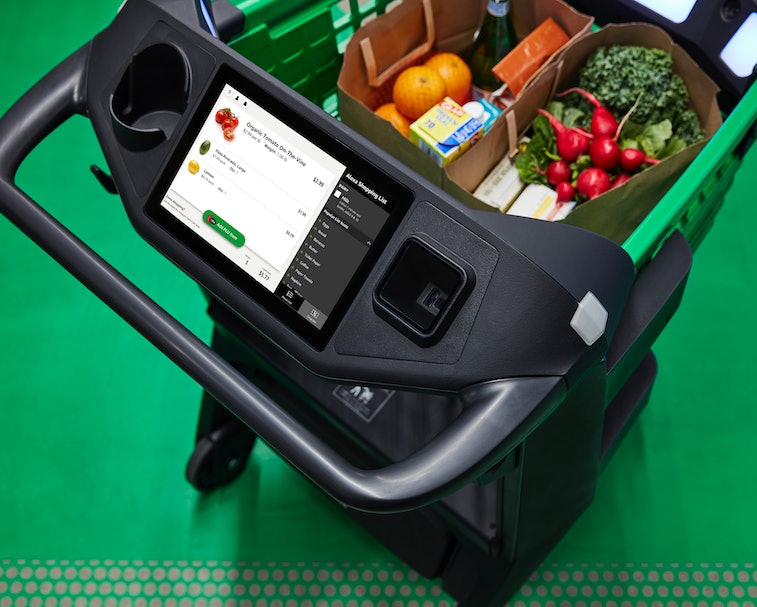 Amazon’s brick-and-mortar stores aren’t the bulk of the company’s business, but they are an interesting testing ground for innovative shopping technologies. The company’s cashierless Amazon Go Grocery store opened in Seattle earlier this year, and the technology used to power it is already seeing marked interest from more traditional retailers. Now you can even pay at Amazon’s stores with a swipe of your palm.

Even the less-hyped tech at these stores is impressive and norm-breaking — take the Dash Cart, for example. It’s the smartest shopping cart you’ll ever meet, with enough technology to eliminate the need for a checkout line altogether.

The unconventional cart is being tested now at Amazon’s grocery store in Woodland Hills, California. A demonstration of the cart, originally posted by TikTok user @davidsuhchan, has garnered a casual four million views on Twitter, as well as nearly half a million on TikTok.

By all appearances, the Dash Cart has next to no learning curve and could present a leap forward in shopping technology. But according to one South Africa-based innovator, it wasn't Amazon’s idea at all.

Who designed this? — The Dash Cart has garnered larger attention thanks to a semi-viral Twitter video. That video also brought the carts to the attention of Mxolisi Yende, an innovator based in South Africa. Yende responded to the video with a hefty accusation: Amazon lifted the Dash Cart designs from his own work.

Yende says he’s been pitching the idea around to sponsors for seven years now. He tweeted images of his patent application — which he called a “smart shopping trolley” — and specified later in the thread that the patent had been approved in 2017.

Beyond these details, it would likely be difficult for Yende to prove that Amazon violated his patent, at least with what he’s shared publicly. The Dash Cart appears much more complex than Yende’s Bluetooth-enabled device, though its roots are the same.

As always, there’s also the burden of proving the intellectual property was Yende’s to begin with. Similar patents have been filed in the past — like this one, created by IBM, that was filed in 1995. Proving who first came up with the idea for a “smart cart” would be a near-impossible task. Some Twitter users point out in comments that Yende’s patent may not have been filed globally, which complicates his case even further.

Checkout time — Big Tech is no stranger to grifting ideas from designers and creators with less clout. It’s a well-worn formula for a reason: the immense power of a company worth hundreds of billions of dollars will beat out smaller competitors just about every time. As usual, the system benefits those already in power while leaving everyone else in the dust.

Even if Yende mounts a case against Amazon’s use of the Dash Cart, it’s unlikely he’ll ever see a penny from the company, despite Amazon having — in Yende’s words — the “deepest pockets in the world.” Which is disappointing, to say the least, because the carts seem brilliant.

We’ve reached out to both Yende and Amazon for more information on the Dash Cart and related patents; we’ll update this piece if we hear back from either.