“For the country’s largest online retailer, with a growing dominance in online advertising, to be engaged in such wholesale deception of consumers demands immediate and aggressive action by the Commission.”

The Strategic Organizing Commission, in its FTC complaint 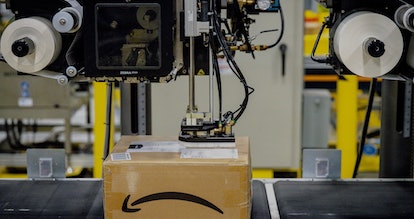 Internet companies absolutely love hiding their ads in plain sight. A new complaint made to the Federal Trade Commission (FTC) alleges that Amazon is doing so to such an extent that it purposefully tricks consumers.

The complaint was filed by the Strategic Organizing Center (SOC), a labor coalition that includes the Service Employees International Union (SEIU), International Brotherhood of Teamsters (IBT), Communications Workers of America (CWA), and United Farmworkers of America (UFW). The SOC’s membership numbers more than 4 million workers, according to its website.

According to the SOC, 28 percent of all search results on Amazon are paid advertisements. And, because none of those ads are labeled as such, customers unwittingly click on the products without understanding the back-end transactions they’ve just set off.

Ad disclosures are common practice in most of the tech industry, mainly because there are laws that forbid any sort of obfuscation around advertisements. But Amazon thinks it can play by its own rules.

Well-documented foul play — The Strategic Organizing Center has done its due diligence in researching Amazon’s search ads before filing this complaint. The organization’s researchers analyzed a total of 130,000 Amazon searches — both on desktop and mobile devices — and found that a staggering 28 percent of all results were actually third-party ads.

The SOC’s complaint alleges that Amazon broke basically every one of the FTC’s guidelines around ad disclosures. The company’s ad practices are so egregious, the SOC says, that the search results can barely be called “search results” at all:

Indeed, the overwhelming proportion of advertisements — advertisements which are not identifiable as ads — within Amazon’s search pages throws into question the fundamental integrity of “search” on Amazon’s online platform, and indicates Amazon is engaging in a much broader deception of consumers by representing these pages as “search results” at all.

Getting away with murder — Amazon’s retail business is obviously enormous, but its advertising business is rapidly growing to become one of the company’s most important sectors. As the SOC points out, Amazon’s ad sales operate on a huge margin of about 75 percent. Analysts expect ads to become Amazon’s most profitable sector very, very soon.

Amazon is attempting to skirt around FTC guidelines by labeling ads in ways that aren’t immediately obvious to consumers. The “sponsored” labels are often buried, presented in small fonts and light font colors. Unless you’re on the lookout for them, you’d probably never notice them at all.

The FTC has, until now, been relatively lax about enforcing digital advertising rules. If there’s ever been a good time to petition for that to change, it’s now; Lina Khan, the newest chairwoman of the FTC, is very vocal in her disdain for Big Tech’s abuses. Khan’s FTC has already begun working to better control online commerce; a few months ago, the group announced extensive new penalties for companies that allowed fake reviews to stay up on their sites.

The SOC hopes its well-researched complaint will spur the FTC into action. You can be sure Amazon will fight tooth and nail to ensure it doesn’t incur any lasting penalties in the process.