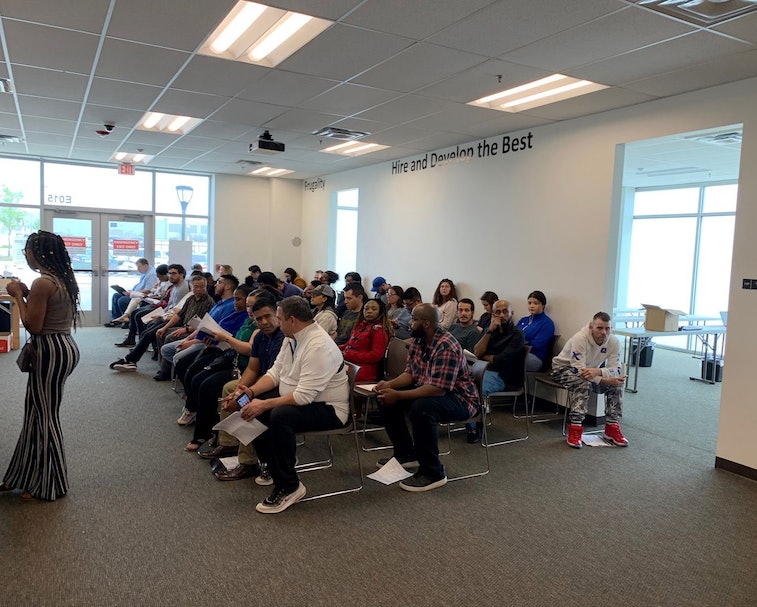 Amazon announced a few weeks ago that it would be hiring 100,000 new workers to meet increased demands from online sales. Now it's emerged that the company was holding massive job fairs to recruit those workers — without taking any special precautions to prevent the spread of COVID-19, Bloomberg reports.

Yes: the hiring that is in itself a result of a terrifying pandemic is furthering the spread of that very pandemic.

The online retail giant’s sales have skyrocketed beyond its staffing capabilities due to stay-at-home measures being used to fight the spread of COVID-19. In its rush to recruit new employees, Amazon hasn't always been taking the proper precautions to continue that fight. In fact, reports show the company’s job fairs are doing the polar opposite of prevention. That’s a miserable state of affairs from an employer that claims its top priority is the health of its workforce.

Social distancing? Never heard of her — Amazon is no stranger to hosting enormous job-recruiting events. Around the holidays, Amazon hires its workers in droves to stave off the influx of gift orders. The company has taken a very similar approach even recently, with crowds of hopeful applicants lining up in various offices across the country. Those long lines are a veritable breeding ground for COVID-19.

Bloomberg’s report details a few instances of this problem from those who were in attendance. One man said the hiring event he attended in Dallas was nearly identical to one he’d attended the year prior: a waiting room full of people in close proximity. No extra precautions had been taken to prevent the spread of COVID-19. When the man brought up his concerns, a manager openly mocked him. He was told to leave the event if he didn’t like the way it was being conducted.

Similar stories have been told by applicants at events in Wisconsin, Oregon, Ohio, and Los Angeles. It can be inferred that other Amazon hiring events across the country took place under similar conditions.

Amazon has since changed its strategy — If there is any good news in this, it’s that Amazon has put some preventative measures in place since these stories emerged.

“These situations occurred two weeks ago and we’ve since moved all new hiree events and orientations to virtual platforms,” said an Amazon spokesperson. “Any situation in which teams don’t follow social distancing guidelines are immediately investigated.”

The company did not mention when exactly these new measures were put in place. Some applicants have since reported hiring events with roped-off seats and time limits.

Amazon’s services are very much in demand right now — as are its jobs, as millions of people in the U.S. find themselves jobless. We can only hope that Amazon has truly made changes to prevent the spread of COVID-19 in its hiring efforts. Otherwise the company could be doing more harm than good in the process of bringing essentials to Americans’ doors.