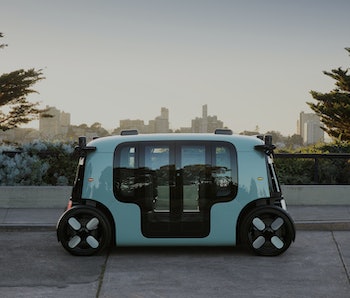 It’s been less than a year since Amazon-owned Zoox revealed its first self-driving taxis to the world, and the company has been hard at work testing them ever since. Now Zoox is switching gears ever so slightly to focus on a common driving obstacle: rain.

Zoox is getting ready to deploy a fleet of testing vehicles in Seattle, a notoriously rainy city, to learn more about how its technology reacts to drizzles and downpours alike. Until now, Zoox has only been testing its vehicles in Las Vegas, San Francisco, and Foster City, where the company began — all pretty dry climates.

The vehicles taking to Seattle’s streets won’t be the strange-looking bi-directional taxi the company plans to deploy for customers. Instead, a fleet of Toyota Highlanders retrofitted with various sensors and testing equipment will navigate Seattle’s streets to gather data about how Zoox’s self-driving technology reacts to various weather conditions. Like all self-driving car companies, Zoox faces a steep uphill battle to receive the go-ahead to carry human passengers. And it’s a hill that’s slippery when wet.

Hunting for talent — Seattle is great if you need some rain. The city sees an average of 152 rainy days every year — much, much higher than Las Vegas’ 26 days per year.

Kai Wang, director of prediction at Zoox, put the company’s rainy day goals best in a statement to The Verge: “A smooth sea never made a skilled sailor.”

Seattle is also very hot for computer science experts. That’s the other main reason Zoox is expanding its testing toward the Pacific Northwest: To attract some fresh talent. The company will also be setting up a full office in Seattle to focus its operations there, according to Bloomberg.

The long slog toward autonomy — It’s difficult to say when we might actually be able to ride in a Zoox. After six years of tireless work, the company officially unveiled its flagship bi-directional vehicle in December 2020. Making the vehicle genuinely safe for operation requires long, intense AI training, though, and it’s even more complex than building the vehicle.

Despite many years of research, autonomous taxi rides are only just now beginning to take passengers in new markets. Waymo, a leader in the industry, only launched its full robo-taxi service about a year ago, and it’s only allowed to operate in Phoenix, Arizona. San Francisco gave Waymo the go-ahead just this month to operate in the Bay Area, and the city is allowing competitor Cruise to send autonomous taxis on the road, too, though only between 10 p.m. and 6 a.m.