American Airlines is flying the cursed Boeing 737 Max once again

“We have the utmost confidence in this aircraft. As a matter of fact, my wife is on board.” 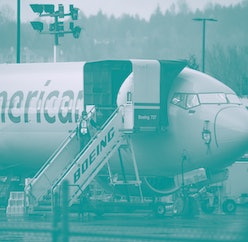 The Boeing 737 Max jetliner has been linked to 346 deaths — and after a short rest it’s ready to carry passengers again. American Airlines is the first to re-introduce the jumbo aircraft to the United States, CNBC reports, with a flight that departed Miami International Airport at 10:40 a.m. today.

The flight to New York’s LaGuardia Airport had 87 passengers on board, according to an American Airlines spokesperson, and the Max’s flight back to Miami on Tuesday is nearly full. American Airlines plans to offer roundtrip service from Miami to New York City for now, with expansion to other cities very soon.

American and other airlines originally planned to have the 737 Max back in the air this past March, but then… well, the world has been a little stressed since March. Airlines are confident that the 737 Max is more than safe now — but the aircraft’s future is anything but certain.

346 deaths — Boeing’s 737 Max, a next-gen evolution of the company’s classic 737, had a very rough launch. The Max found itself the subject of scandal after two major crashes left 346 passengers dead. Experts found that the problem was the plane’s larger engines, which were liable to stall mid-flight. Boeing built a software system meant to mitigate this risk, but that system apparently malfunctioned twice in a five-month period. And it turns out Boeing employees had raised concerns about it doing just that. Yeah. Bad all around.

Boeing halted production of the plane and has spent the intervening months working out the kinks in its operations.

But like… how safe is it really? The Federal Aviation Administration (FAA) has cleared the 737 Max to carry passengers once again. But the FAA also declared the plane safe last time, and we see how well that turned out. The FAA has since made its regulations for clearance stricter. Stephen Dickson, chief of the FAA, says the conditions that caused the two fatal 737 Max crashes are now “impossible.”

It’s unclear whether or not passengers will feel safe enough to keep the planes booked and busy. Several victims of the crashes and family members of the deceased have called for the planes to never carry passengers again — a request that’s been ignored by regulators. American Airlines is allowing customers to re-book their flight if they feel uncomfortable flying on the 737 Max, but the company’s president told reporters it “hasn’t noticed” anyone asking yet.

Of course, American isn’t going out of its way to remind customers that the plane has been involved in multiple fatal crashes.