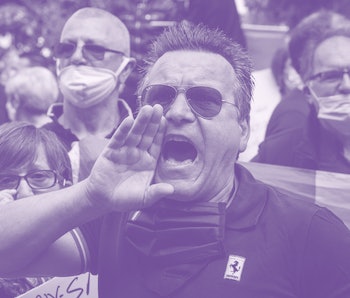 Anonymized mobile phone data shows that demonstrators are traveling far and wide for anti-quarantine protests, potentially dragging COVID-19 with them, according to a report by The Guardian. The location data, which was captured from “opt-in cellphone apps,” was analyzed by data firm VoteMap to determine the movements of devices at protests in Michigan, Wisconsin, Illinois, Colorado, and Florida.

A progressive campaign group called the Committee to Protect Medicare provided the data to The Guardian. The group worries that the protests — which fight measures being taken to slow the spread of COVID-19 — are actually spreading the virus to areas previously experiencing next to no infections.

This information doesn't illustrate how these protests have impacted infection numbers, but it does raise important concerns over how anti-lockdown protests could be furthering the fallout of the pandemic across the U.S.

Angry travelers abound — One of the easiest ways to combat the spread of the novel coronavirus is by simply staying put. Stick to your home and its general surrounding area as much as possible and you’re much less likely to carry the virus to unsuspecting strangers. Another easy measure is to wear masks on the occasions you do have to go out.

The anti-lockdown protests across the U.S. are mostly centered on ending quarantining measures at a local level — they aim to reopen individual towns, counties, or states. But these findings prove people are willing to travel large distances to lend their voices to protests. And photos suggest many protestors aren't wearing masks.

According to the data analyzed by VoteMap, people traveled to an April 30 protest in Lansing, Michigan from as far as Afton, which is 180 miles away. Devices physically present at the protest can be seen returning to points all over the state, while some even crossed state borders.

An April 19 “Operation Gridlock” protest in Denver brought in people from Wyoming, Oklahoma, New Mexico, and Utah. Data from a protest in Florida the day prior shows devices returning to all parts of the peninsula, all the way back up to the Georgia border. Protestors in Wisconsin on April 24 returned to small towns and the neighboring states of Minnesota and Illinois.

This could make things worse — No, this data doesn’t prove protests have helped spread the virus. But, we do know of at least one major protest leader who has tested positive for COVID-19, and there are surely others that haven’t been reported or don’t yet know they’ve been infected.

The data presented here do, however, make it clear that people are gathering in close quarters, often without masks, and then dispersing to various surrounding areas. As Rob Davidson, the executive director of the Committee to Protect Medicare, put it: “The behavior we’re seeing at protests carries a high risk of infection.”

The problems with these protests should come as no surprise to anyone with a basic understanding of how COVID-19 spreads. By coming together physically like this, protestors are going directly against advice from public health professionals. The very reason for their demonstrations — lockdown measures — will only need to be made stronger and go on for longer if the virus keeps spreading.