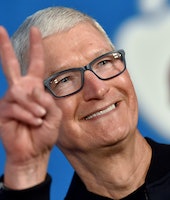 So that’s why Apple’s so keen on keeping things business as usual for the App Store. According to a Wall Street Journal deep dive into court documents provided for its recent antitrust trial against Epic Games, Apple’s raking in profits from App Store video games more than some of the biggest industry names combined. In 2019, for example, the company made a whopping $8.5 billion, thanks in no small part to its controversial 30 percent App Store profit cut — more than Microsoft, Activision Blizzard, and Sony profits put together.

Further data indicate that in the last fiscal year, customers reportedly spent over $45 billion in mobile gaming on the App Store, of which Apple nabbed about $13.5 billion — 5 percent of the company’s overall sales of $275 billion in 2020.

Hard to spin any other way — Despite its best efforts, Apple’s attempts to downplay the App Store’s inordinately lucrative gaming profits rang a bit hollow to everyone in the room during the trial. At one point, Apple CEO Tim Cook argued that the financial documents painted an exaggerated view of the situation, an assertion the judge pushed back citing... well... the basic mathematics involved. She even went so far as to call Apple’s gaming profits “extraordinarily high,” which given fiscal years 2018 and 2019’s respective 74.9 percent and 77.8 percent operating margins, is a pretty accurate description.

Keeping up with the competition — Apple’s relatively passive approach to raking in video game profits through the App Store got the company this far, but coming legal battles, antitrust pushback, and an ever-changing mobile gaming landscape means that the future is hard to predict. With the growing popularity of streaming game services from Microsoft and Nvidia alongside VR expansion, Apple will need to have a clear strategy to continue staying ahead of its competition.