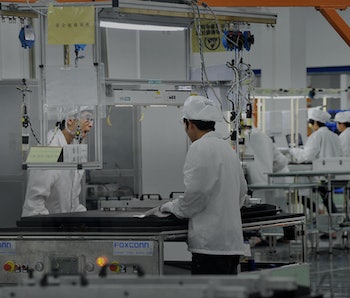 India’s largest iPhone assembly plant, a facility owned by Foxconn, has stopped production for the time being at the behest of Apple. Reuters reports that both Apple and Foxconn found that some worker housing and dining facilities “did not meet required standards.” The exact nature of the plant’s probationary period has not been disclosed to the public, though it is expected to be temporary.

The Foxconn factory, which is located in Chennai, has faced numerous workforce issues this year, including a widespread bout of food poisoning that affected more than 250 women. At least 150 of those women were hospitalized.

The facility’s issues run even deeper than improperly prepared meals, though. Workers took to the streets following the food-poisoning incident to protest the facility’s working conditions. Nearly 100 employees were detained by law enforcement for blocking a highway in the area.

Restructuring or whatever — Foxconn has pledged to improve the factory’s working conditions but in the least-committal way possible. A spokesperson for Foxconn said the company would be “restructuring” its local management team and taking immediate steps to improve facilities. Whether or not the latter simply means sourcing better cooks for the kitchen remains to be seen.

The spokesperson also said that employees will be paid during their forced time off, which began on December 18. It’s unclear whether or not those employees have been allowed to stay in their Foxconn dormitories during that time.

Supply chain controversies — The impact of this probationary period on iPhone product production will likely be minimal. More pressing is the impact on the factory’s workers. Apple now says it’s sending independent auditors to ensure conditions are improved before the site reopens.

This is not the first time Apple has experienced such controversy in its supply chain. Last year, for example, Apple’s most important glass-supply company was found to be using forced Uighur labor in its facilities. Meanwhile, lobbyists hired by Apple have pushed for weaker protections on foreign labor practices. And, yes, Apple even put another Indian facility on probation last year.

It’s obvious, at this point, that whatever oversight Apple provides for suppliers is not enough. The fact that the Chennai plant didn’t meet the company’s standards should have been discovered well before the boiling point.

But then again, Apple can’t even handle keeping its working conditions in check here in the U.S. Perhaps asking for overseas oversight is just too much.