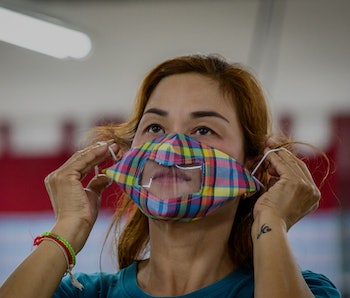 The practice of wearing face masks — no matter how trendy — is proving to be a communication nightmare for many. To ameliorate the situation, Apple will distribute in-house and ClearMask face masks for its corporate and retail staff over the next two weeks, according to Bloomberg.

Unlike the conventional face mask you see these days, these masks are expected to be large, clear, and all about getting your message across.

What will Apple's face mask look like? — At this moment, the company has yet to reveal its in-house design but Bloomberg gives us a hint at what we can expect to see worn by both corporate and retail employees. It's reportedly large and "typical" to Apple's style of making big statements and grabbing people's attention. The company told the publication that the Face Mask is designed by the same team, Engineering and Industrial Design, that helped make iPhone and iPad. It's expected to have triple-layer protection that enables filtering for incoming and outgoing elements from one's mouth and external surroundings.

The mask is reportedly reusable up to five times and may encourage other tech companies to follow suit and enable protections for their workers. Apple also notes that it ensured that its private production of the masks did not disrupt the critical supply of personal protective equipment, which is especially needed by medical personnel.

What will ClearMask look like? — Unlike Apple Face Mask, ClearMask is already being used by restaurant workers, retail staff in other companies, receptionists, and more. This advertised photo for ClearMask looks slightly strange, to say the least, but it addresses how so many are struggling to communicate visual cues with masks on.

The emphasis of ClearMask is on communication. Many people have found that covering half of their faces has affected their ability to communicate with others. Especially for people who may have hearing issues or speech problems, the ability to communicate clearly and effectively is key. So the transparent ClearMask, according to its manufacturers, is the kind of covering that "provides natural, empathetic communication and eliminates barriers caused by traditional masks."

It's clear that Apple wants its corporate and retail chain of command and communication to go on productively. The decision is a combination of showing (some) concern for its workforce and also making sure that the show goes on, pandemic or not.