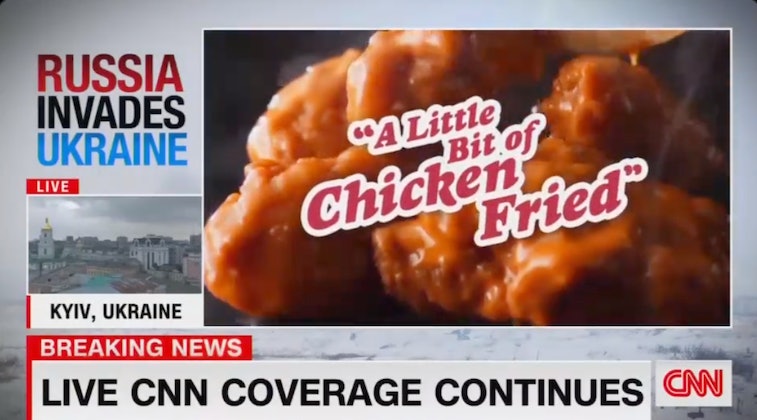 Occasionally a convergence of events occurs that manages to encapsulate our terrifying dystopian present so perfectly, so succinctly, that it almost defies words. Yesterday, CNN produced just such an event:

During a live broadcast of air raid sirens echoing ominously across Kyiv in anticipation of a Russian attack, CNN’s news coverage abruptly made room for a pandering, countrified Applebee’s commercial featuring dinner specials and hip-shakin’ cowboys set to Zac Brown Band’s inane song, “Chicken Fried.” It was... jarring, to say the least. To say more — it was an absolutely tone-deaf, demoralizing example of how daily life is now terrifyingly indistinguishable from Neal Stephenson’s Snow Crash. And Applebee’s, for its part, sounds about as horrified as the rest of us.

The brand is ‘concerned’ — “When we were made aware that our ad was placed in this manner, we immediately reached out to CNN to pause our advertising on their network,” an Applebee’s spokesperson informed Ad Age yesterday. “It never should have aired, and we are disappointed in the actions of the network.”

In an attempt to assuage everyone’s worries, the Applebee’s spokesperson also reassured a tired public that the Neighborhood Grill & Bar is “deeply concerned about the situation in Ukraine.”

Thank you for your thoughts and prayers, Applebee’s.

CNN altering its ad strategy, too — CNN, for its part, also would like everyone to know it has learned a valuable lesson this week. PR for the channel also confirmed to Ad Week that all picture-in-picture advertising would be removed from its ongoing coverage of the geopolitical and humanitarian crisis unfolding overseas. No word on whether or not we’ll be seeing Jack-in-the-Box spots during future coverage of other catastrophes at home and abroad.