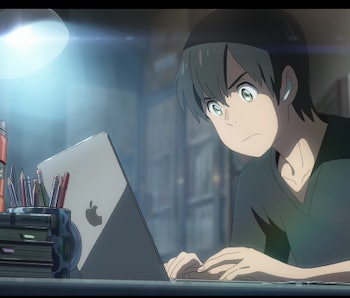 Apple has aired a new commercial in Japan that shows off its MacBook in various scenes featuring well known (and lesser-known) anime characters, softly harkening back to its iconic "Hello" iPhone ad.

The spot doesn't promote anything specific — Other than making a statement that Apple's laptops are widely recognizable and used by a whole spectrum of different people, for a whole range of different tasks. The commercial shows a DJ using a MacBook during her set, then cuts to a teacher speaking to his student from behind a MacBook; it jumps from style to style, depicting adults, teens, creatures, and kids alike all delighting in the use of their Apple products.

This is the first time Apple has produced an anime-themed commercial, and the result is quite impactful. While you may not understand the lyrics of the background track or be able to read the descriptions (because it's all in Japanese), it's not hard to get the gist. Everyone loves the MacBook! You will love a MacBook!

Even though its laptops are the star of the show, Apple also briefly shows off the AirPods in this commercial — there's even one scene with Apple's wired EarPods. How very uncool.

A new Apple — Contrast this message with the aging perception that Macs were for spoiled hipsters or black-clad graphic designers, and all the "serious" work was done strictly on Windows machines. Or the trope that Apple computers were out of a reasonable price range for most general consumers. Seeing the company having this much fun (and acknowledging its computers are for everyone) paints a very different picture.

Ad kings of the world — Of course, Apple is truly the master of the memorable ad. When introducing the first iPhone, the company produced the "Hello" spot, which has now lodged itself into the collective unconscious and has been endlessly ripped off.

And who can forget the iconic iPod ad featuring the band Jet, who truly sucks. And yet Apple somehow convinced us all that we should buy an iPod and presumably "rock out" to Jet, who, again, suck.

But of course, Apple's greatest advertising moment happened a long, long time ago, when the company introduced the Macintosh to the world during Super Bowl XVIII. Directed by Ridley Scott and depicting a nightmare society based on the George Orwell book 1984, the spot not only set the stage for a computing revolution, it also made Apple seem wildly cool and weird, which, to be fair, it was at one point.

Here's to the crazy ones.