Apple's on the hook for millions to settle infamous 'batterygate' saga 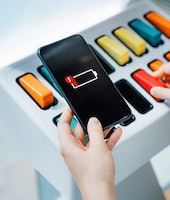 The amount Apple will pay to settle cases regarding hamstringing the performance of older devices.

If you've ever had an older iPhone slow down or suddenly start demonstrating battery troubles, you're not alone. A legal battle between Apple and some three dozen states in U.S. has finally led to that moment of schadenfreude for many people: Apple will have to pay $113 million in order to settle a legal inquiry into its practice of weakening older iPhone models.

According to The Washington Post, the practice was to "preserve their batteries" but it led to understandably intense amounts of public anger and condemnation as it forced many to ditch their older iPhones and pay for more expensive ones. The entire ordeal picked up attention and momentum in 2017. Arkansas, Arizona, Indiana, and other states initiated their own joint inquiry into the matter, demanding that Apple be clearer about its practices as opposed to keeping consumers in the dark.

"Big Tech must stop manipulating consumers and tell them the whole truth about their practices and products," Arizona attorney general Mark Brnovich said. "I’m committed to holding these Goliath technology companies to account if they conceal the truth from their users."

Batterygate was bound to explode — Whatever the product is, consumers don't like to be taken advantage of. The legal probe led by 34 states secured bipartisan support. When it comes to holding Apple accountable, both Democrats and Republicans have been able to put their differences aside... if only the same were true for stimulus packages.

Although Apple has, inevitably, denied any wrongdoing, it had to update its practices regarding preserving battery performance on older devices in 2018 due to the mounting public pressure. For several years now, iPhone users have pointed to slowdowns that many argue tend to arrive around the same time a new model does. That theory makes perfect sense, though, because Apple usually releases new versions of its operating systems at the same time it unveils new devices. The new software tends to be more demanding, so once it rolls out, those with older hardware may find their devices' performance takes a knock.

It's not only American users who are upset with Apple's methods. In France, regulators fined the company about $25 million, accusing Apple of throttling devices and keeping French consumers out of the loop about its model strategies. In addition to paying $113 million, the legal probe also requires Apple to be more forthcoming about its battery management tweaks and updates on its website as well as iPhone models.

With information readily available, consumers will have a chance to make more informed decisions. For Brnovich, the investigation isn't just about Apple. It's about fair play. It's supposed to serve as a reminder for the "Googles of the world that whether [it’s] a Republican or Democratic attorney general, we’re taking these issues very, very seriously."