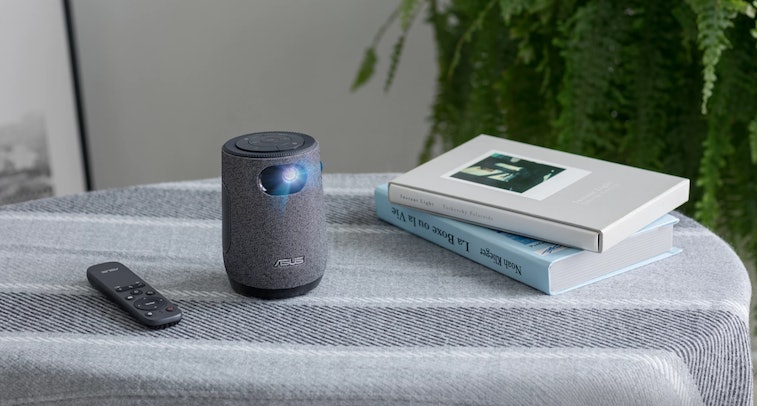 This year's all-digital CES may be behind us, but it will take days to sort through all the new gadgets and gizmos (not to mention weird-ass robots) unveiled for consumers. While some of them err on the stranger side, quite a few have us excited for what 2021 has in store (tech-wise, we are terrified of everything else). Take this new home projector from Asus, which might become one of the more versatile miniature options on the market.

Launched yesterday as part of the company's "Be Ahead" event at CES 2021, the Asus ZenBeam Latte L1, like a well-brewed cup o' joe, is small while still packing a punch.

A home theater in your pocket — Despite its miniature size (roughly as tall as a 16-oz coffee, hence the name), the portable projector will offer 700p imagery at a 40-inch screen size with 300-LED-lumen lighting, with the option of sizing-up to around 120-inches. Although a single charge can on its 6000-mAh battery only get you about three hours' worth of wireless video projection, the option to use the Latte L1 as just a Bluetooth speaker system can net upwards of 12 hours of juice.

Like an Echo Dot, but less invasive — In terms of sound, the Latte L1 isn't bad for its size, and features built-in 10-W Bluetooth audio utilizing Harmon Kardon sonic profiling along with three modes for movies, music, and gaming. As is the rage these days, the projector is encased in a fabric mesh akin to Amazon's Echo Dot or Google Nest. The Asus projector also comes pre-installed with Aptoide TV, so users can pick from over 2500 apps including the essentials like Netflix, Hulu, Amazon Prime, and YouTube. Both HDMI and USB inputs, along with wireless mirroring for smartphones, greatly expand the Latte L1's capabilities.

Unfortunately, that's about all the info we've got on the new Asus offering. The company estimates the Latte L1 to hit the North American markets sometime within Q2 of this year, but nothing definitive yet. Likewise, there isn't any available price tag, but we imagine all that should get cleared up in the very near future. Until then, we guess you'll just have to settle for these sweet LG TVs with built-in Stadia and GeForce video game streaming. Trust us, it's a lot cooler than you might think. If nothing else, it's pretty much the only way to play Cyberpunk 2077.