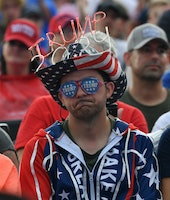 The amount of OANN's revenue derived from AT&T-owned TV platforms.

A special report published today from Reuters reveals that telecom giant AT&T is one of the chief architects and continual funders of the radical rightwing MAGA cultist channel, One American News Network. First launched in 2013, OANN operated for years as a platform for conservative talking points so unhinged they made Fox News look sensible by comparison. Leading up to the 2016 election and then throughout the subsequent Trump presidency, OANN became the de facto propaganda arm for Donald’s proto-fascistic aims.

In a 2019 deposition obtained by Reuters, OANN founder and CEO Robert Herring, Sr. explained that AT&T execs are directly responsible for the channel’s inception. “They told us they wanted a conservative network,” Herring said. “They only had one, which was Fox News, and they had seven others on the other [leftwing] side. When they said that, I jumped to it and built one.”

OANN’s primary viewership stems from DirecTV — AT&T currently owns a 70-percent share in the company. Herring says he was offered $250 million for OANN in 2019, but that without their audience base courtesy almost entirely of DirecTV, an accountant for the company stated its value “would be zero.”

Trump’s golden seal of approval — OANN’s rise to unfortunate socio-political prominence can be attributed almost entirely to Donald Trump, who consistently fawns over the channel’s bullshit pipeline. Reuters notes that in his final two years in power, Trump provided blurbs for @OANN on Twitter to his 88 million followers a minimum of 120 times.

Still going strong — OANN’s success continued both in the months leading up to, and after, Donald’s final days in office. The channel often helped fuel the flames for MAGA cultists’ conspiracy theories regarding rampant election fraud that supposedly cost their Dear Leader a second term. The frenzy culminated during the deadly January 6 insurrection attempt in Washington DC, where at least one OANN flag was seen being held by someone in the mob of traitors.

Hard to see how this will change things — Unfortunately, as damning as the new information is courtesy of Reuters, there doesn’t appear to be a whole lot to do about the situation. It seems both AT&T and OANN are well within their rights to collaborate as they do, and barring antitrust reviews of the telecom’s DirecTV buyout or coordinated, successful protest campaigns, OANN is here to stay for a while.