Autonomous drones are getting their own tiny airport in the U.K.

“Essentially, this will be the world’s smallest airport. It’s like an electric watering hole.” 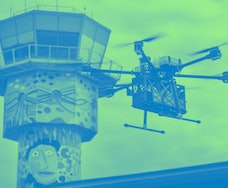 Like it or not, drones are increasingly becoming an integral part of our eco-minded, yet still hellishly dystopian future. Luckily, it isn't all visions of flying Bezos-copters roaring above our heads; some countries' urban planning groups are working to rapidly integrate drone functionality within city spaces to accommodate a wide range of services.

According to a write-up earlier today from TechRadar, a startup called Urban-Air Port (strange use of hyphens and/or spaces, but okay) has partnered with Hyundai to help secure a £1.2 million — or roughly $1.64 million USD — grant courtesy of the British government's Future Flight Challenge program to finance the construction of the "world's smallest airport" exclusively for drone services. Located in the U.K. town of Coventry, Urban-Air Port's service should be operational by November of this year, allowing for expanded testing of eVTOL (electric vertical take-off and landing) drone integration within cities.

Environmental and emergency service priorities — "One of the reasons we are at the forefront of this project is because of our obligations to reduce congestion and emissions,” Coventry City Council's Transport Innovation Manager, Sunil Budhdeo, told Cities Today last week. The pandemic's massive strain on global home delivery infrastructure, along with an increase in consumer transportation emissions, means city planners are even more concerned with tackling climate change issues such as these. One potential solution is heavy investing into electric drone fleets to alleviate urban traffic congestion and its accompanying carbon footprint.

"Essentially, this will be the world’s smallest airport. It’s like an electric watering hole that will receive autonomous cargo drones and passenger-carrying air taxis. It will also welcome visitors and passengers to come and experience what the infrastructure can do,” Urban-Air Port founder, Ricky Sandhu, also explained to Cities Today in the same article, adding, "City space is very limited, so that’s why our idea is to make sure that we can have a scalable, appropriately sized infrastructure that can deliver the capacity but also fit into our cities without causing too much disruption.”

The first of many drone-ports — If all goes as planned, Urban-Air Port's Coventry location will begin hosting a steady stream of drone traffic by the end of 2021. Depending on the pilot drone-port's success, the startup then plans to expand its scalable designs to as many as 200 additional sites across the globe within the next five years.