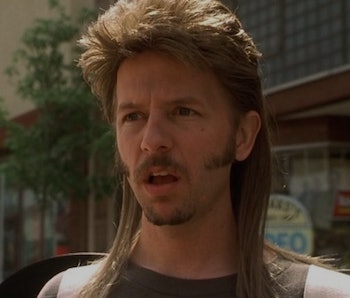 It’s an objective fact that the only person who should be allowed access to a Twitter account is Wint, aka @Dril. The pseudonymous absurdist has combined meta-humor, satire, and grammatical mutilation for years, resulting in nearly 12,000 tweets to the delight of his 1.6 million followers — so much so that I believe we have all overlooked a key facet of Wint’s Twitter profile.

Everyone, may I please draw your attention to Exhibit A:

The poo... it is on us — Dril has “liked” precisely 30 tweets since they joined in September of 2008... all from Joe Dirt parody accounts... all referencing the exact same line: “I got the poo on me!”

For those who have not seen David Spade’s magnum opus from 2001, the quote refers to the scene in which Joe Dirt got poo on him.

The future is uncertain — The last “I got the poo on me” tweet enjoyed by Wint was authored on July 3, 2018 — but the preceding “likes” are not in chronological order. This leads me to believe he either A) finds them en masse, or B) randomly searches them out for recognition. Either explanation seems plausible for Wint.

Plenty of people have since referenced the line on Twitter; a search of the site yields the last one came from April 3 of this year. There are even a few attempts to tag Wint in an “I got the poo on me” callback, but to no avail — that does not meet the standards of @Dril.

By my estimates, the 04/07/18 “I got the poo on me” is the last tweet to come from a Joe Dirt-related handle. It is unclear when, or if, they will do so again — but if they do, one thing seems certain to me: Wint will appreciate the poo.