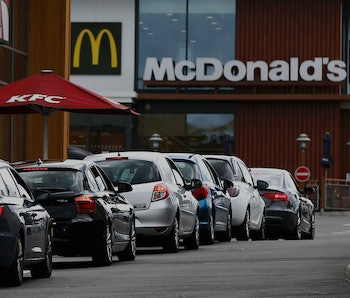 Alternative meat products might finally be coming to a McDonald’s near you. Well, “near” you if you happen to live in the U.K. And “finally” only if McDonald’s decides to go through with the plan — nothing is set in stone just yet.

Insiders at Vegan Food UK reported this week that McDonald’s is surveying customers about whether they’d be interested in the addition of a vegan burger to the menu. The company has said nothing publicly of its plans thus far, though.

With faux meat products more popular than ever thanks to pandemic-prompted meat shortages, there’s really never been a better time for the world’s most popular fast-food chain to hop on the vegan train.

Didn’t they try this already? — We’re feeling a little déjà vu with this rumor. Late last year, McDonald’s did trial something it called the “P.L.T.” — that’s Plant, Lettuce, Tomato — in 28 Canadian stores. It later expanded the trial to 50 more stores across Ontario.

At the time, McDonald’s VP of Global Menu Strategy, Ann Wahlgren, said: “As customer interest in plant-based options accelerated rapidly, our curiosity piqued, too. We’ve kept an eye on this emerging trend and now we’re ready to learn more by running a test in one of our markets. “

That initial trial run ended in April, with the company quietly removing the P.L.T. from test restaurants without public comment. The most McDonald’s has said about the P.L.T. since is that the company has “no current plans to bring it back to our menu at this time.”

Already late to the game — Even if the P.L.T. were to be re-introduced tomorrow, McDonald’s would already be incredibly late to the faux-meat market. Burger King introduced the Impossible Whopper early last year, and now it’s available at every one of its stores in the U.S. Meanwhile, White Castle and Dunkin’ have also added vegan options in the last year or so. Even Disney cruises offer Impossible Foods products.

It seems McDonald’s might be ready to try again, though. The company really chose a bad time to discontinue the P.L.T., because grocery stores have found alternative meat products flying off shelves since the onset of the pandemic. Impossible Foods has recently expanded its shipments for that very reason. Pandemic aside, the growth in demand is also due to the massive increase in vegetarians, vegans, and the less committed who nonetheless attempt things like "meat-free Mondays." The meatless trend isn't going anywhere, so McDonald's will no doubt get on board eventually. The only question is when it'll happen, not if it will.