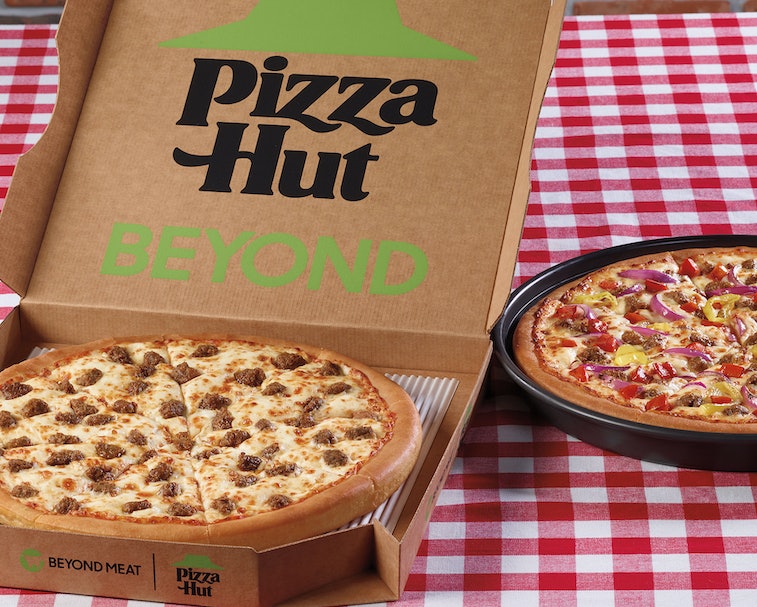 After a tumultuous Monday on the U.S. stock market that saw its share price plummet 25 percent, Beyond Meat shared some stabilizing news on Tuesday. The plant-based meat company is partnering with Pizza Hut on two new pizzas, according to Business Insider. After McDonald’s downplayed Beyond’s role in the creation of the new McPlant burger, this partnership seems truly mutual and couldn’t come at a better time for both Pizza Hut and Beyond Meat.

Beyond’s stock prices went on a wild ride as it revealed it had worked with the company, but COVID-19 had taken a chunk out of its projected profits. Comparatively, Beyond Meat chief marketing officer Stuart Kronauge and Pizza Hut's chief brand officer David Graves spoke positively about their companies’ collaboration to Business Insider:

“You see the growth of pizza during the pandemic and also the growth of plant-based — to me, it's just the perfect hand-in-hand opportunity to give people what they want without the sacrifice," Kronauge told the outlet.

Saving each other — The pandemic has absolutely led to a boom in pizza delivery for large and small companies alike. Though this year has helped Pizza Hut’s profit margins, it’s trended downwards over the years while Domino’s has soared to new heights. Domino’s is a bit of a secret tech company, often embracing change. It wasn’t afraid of a drastic rebrand, it’s delivery tracking feature was ahead of its time, and it was often the company with the first food app on smart TVs or among the first to offer smart speaker integrations.

Pizza Hut, decidedly stuck in the past, desperately needs innovation and Beyond Meat is offering it a chance to compete in a market shifting to new dietary preferences. As Impossible Foods and international companies start to hone in on the market, Beyond Meat has struggled to maintain dominance causing JPMorgan to downgrade its stock in September. Impossible Foods, not unlike Domino’s, is much more interested in pioneering new products while Beyond, by its own naming design, is stuck in a smaller chunk of the market.

With Impossible appearing on ever more store shelves and making lucrative deals of its own, Beyond really needed a win this week. This partnership is a step in the right direction, but the fight is arguably only just starting.