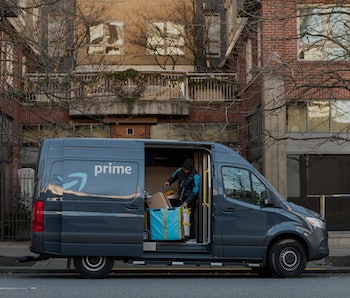 The American Edge Project, a pro-tech advocacy group backed by Facebook, released its first advertisement last week. Called, "Time for innovation," the spot touts how technology companies are helping people stay connected during the pandemic when many have been sheltering in place for months.

The ad contrasts images of empty airports, offices, and classrooms with scenes of people connecting with their loved ones over Zoom, receiving packages from Amazon, and Googling for telemedicine options.

America, umm, first? — American Edge is backed by Facebook, and likely by at least some of the other technology companies featured in the ad, though Facebook is the only one to confirm its involvement. The group's stated principles hew closely to that company's line that American business shouldn't be slowed down by regulation or else it risks being overtaken by Chinese competitors, which wouldn't necessarily support the same type of open internet and freedom of expression that American companies advocate for. Or at least claim to.

Big tech is under intense scrutiny by lawmakers and regulators who are evaluating whether or not the likes of Facebook and Apple are hindering competition through their sheer might.

Deny and deflect — If you believe American Edge, being big is actually good because it means that Facebook can spread American ideals around the world and protect Americans from potential surveillance. Its size means it can also offer useful services like video chatting for free.

There's certainly something to be said for technology making it much easier to stay connected to loved ones throughout the pandemic. Without services like Messenger and FaceTime, loneliness probably would've gotten the best of many people.

But it also implies that Facebook's behavior is somehow better because it's American. The company continues to collect a lot of information about its users, and probably knows much more about them than TikTok. And Facebook clones nearly every competitor that poses any threat to its business, reinforcing its size in the process and stifling innovation.

Is this innovation? — Inciting fear about TikTok, then, is really just a shrewd attempt to knock its biggest competitor out of the market because the intense scrutiny it's facing from lawmakers means that Facebook likely wouldn't be allowed to buy the company itself. Last week it coincidentally released its own clone of TikTok called Instagram Reels. Is cloning products really "innovation" at work? It's most of what the giants do nowadays, though, because they've learned that if you can't acquire, you copy.

Just because Google can offer productivity apps like Docs for free doesn't mean it's a benevolent actor. Small companies that might innovate more get squeezed because they don't have the cash pile with which to compete, and making something "free" entrenches the big players and gives them access to ever more data... which in turns creates insurmountable barriers to entry for newcomers.

And by controlling distribution, they can decide the winners and losers. On iOS, Apple offers a game subscription service that includes lots of family-friendly games, but the company also blocks iOS users from accessing gaming streaming services like xCloud that are far more innovative in nature.

It's telling that Facebook and other technology companies feel the need to spend money on a marketing campaign to convince people of their worth. The fact that they lean on nationalistic urges isn't surprising either given its historical effectiveness as a tool of propaganda. It can simultaneously be true that technology is hugely useful and that big tech should be broken up. Facebook and its friends are trying to distract from the second half of that proposition.