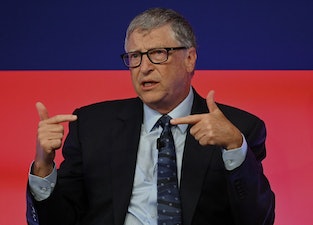 How much money the Breakthrough Energy Catalyst aims to invest in clean energy.

Unlike many high-profile tech bros, Bill Gates has never shied away from speaking up about climate change. Now he’s taking that to an entirely new level. Breakthrough Energy Catalyst (BEC), a fund Gates backs, is reportedly looking to invest up to $15 billion in clean technology initiatives.

That sizable sum will be utilized for projects across the United States, the United Kingdom, and the European Union, according to BEC managing director Jonah Goldman. BEC plans to invest across tech projects focusing on direct air capture, green hydrogen, aviation fuel, and energy storage technologies.

Thus far, BEC has actually only raised $1.5 billion in private capital for the investment. Obviously, $1.5 billion is nothing to sneer at, but it’s also just 10 percent of BEC’s larger investment goal. How will the fund manage to stretch that initial investment to hit the $15 billion mark? By using “innovative financial structures and partnership agreements,” of course.

Strategic green investment — Breakthrough Energy’s overarching goal is simple in nature: fund breakthroughs that will bring the world to net-zero carbon emissions. The group understands that actually getting to this goal is incredibly complex. That’s why Gates started the group in 2015 — to take the problem apart through the world’s most powerful resource: money.

Breakthrough Energy’s Catalyst program is just one part of this equation. As the sector’s name suggests, it’s all about speeding up the process. Clean energy innovations are most often tested at a diminutive scale, and a significant influx of funds is usually needed to take those projects to a scale large enough to affect real change in the world.

That’s where BEC steps in. The Catalyst uses strategic methodologies to not just throw money at innovators but also help negotiate agreements with suppliers and buy down remaining costs.

Money talks — The good news about climate change is that plenty of people are working every day to create technology capable of slowing the planet’s destruction. The bad news is that we live in the golden age of capitalism. Many of these technologies will never get the chance to proliferate far enough to actually change the world — all because there’s not enough cash behind them.

And so as much as we hate to say it, investing money in clean tech is really one of the best ways rich tech bros can work against climate change. Yes, we’re absolutely going to roll our eyes when Jeff Bezos grandstands about the environment he helped screw up. We’re also going to let him throw as much money as he wants at climate change projects.