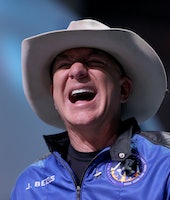 The estimated amount of stocks sold off by wealthy tech bros this year alone.

The majority of Americans are struggling to stretch their dollars this holiday season as inflation and supply chain issues continue to rub salt in the economy’s wounds, but for that less-than-one-percent of us out there, it’s never been a better time to hoard even more grotesque amounts of wealth. As CNBC and elsewhere reports, Big Tech CEOs, shareholders, and major members of the Billionaire Boyz Club like Elon Musk and Jeff Bezos are selling off their company stocks at record levels. This year alone, the wealthiest corporate leaders have sold a combined $69 billion; 30-percent more than last year, and almost 80-percent more than the past decade’s average.

And guess what? They ain’t done yet, folks! As tax season gets into gear and the richest Americans attempt to avoid the worst of looming 2022 tax hikes (that are both reasonable, and ensure they remain the richest Americans), expect more stocks to sell for ridiculous profits.

They wouldn’t even notice the difference — The record-making sell-off comes as tech billionaires face extremely fair tax rate adjustments while stock prices are also majorly inflated. Determined to give as little as they can to the authorities, it makes more financial sense to simply sell now instead of getting hit by a 5% surtax on income over $10 million and 8% on income over $25 million... an increase that hasn’t even gone into law yet. It’s only been proposed by the House of Representatives.

Keep in mind that, even at those tax rates, men like Bezos and Musk will assuredly remain the wealthiest people on the planet. They could lose billions of dollars tomorrow and literally notice zero change to their pampered lives. So yeah... same as it ever was (at least, ever since the dawn of capitalism).