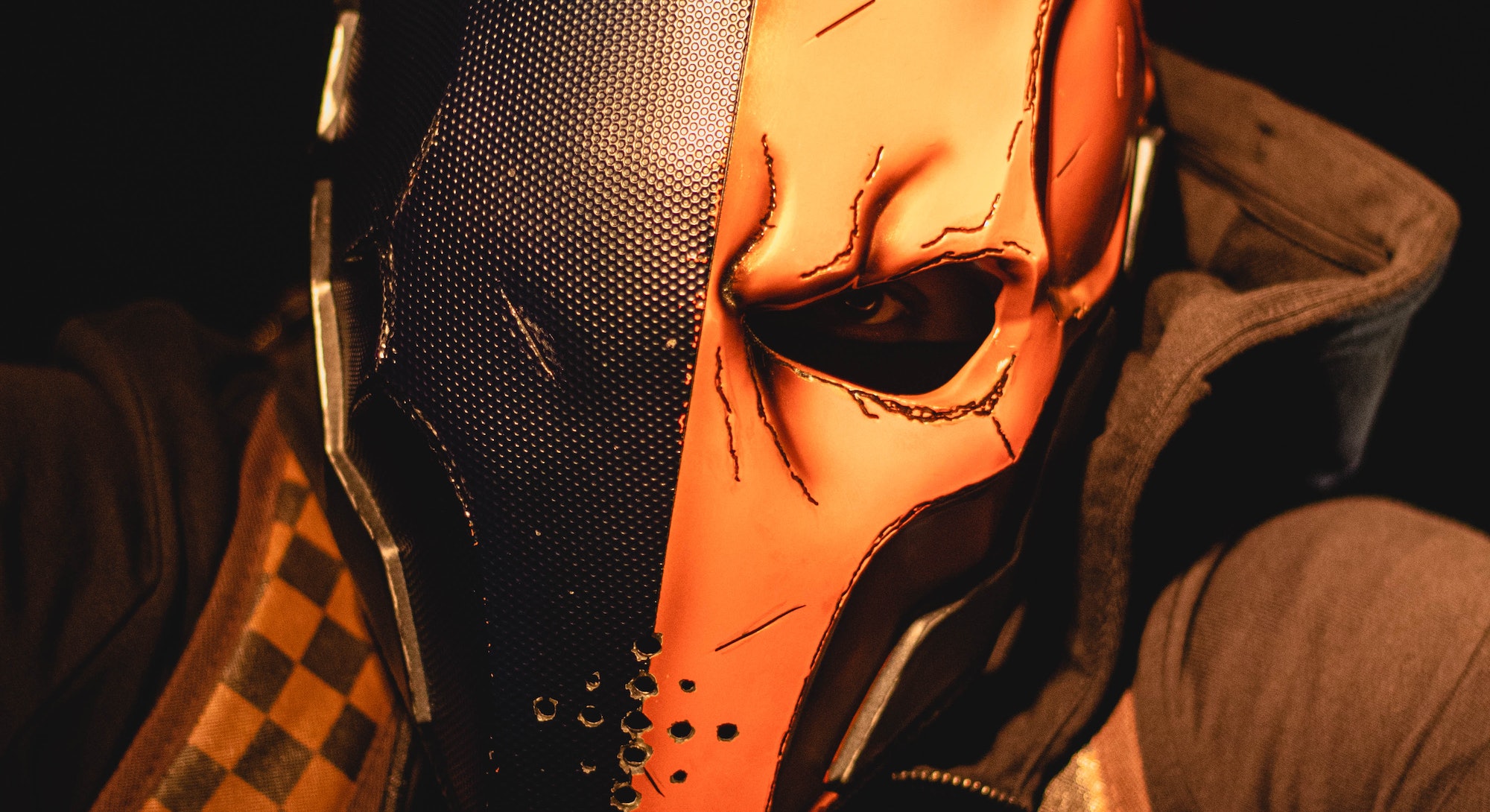 He’s only been making music for seven months, but SK-47 is on the cusp of something big.

The U.K. drill rapper has amassed almost two million streams on his self-released “Streets in South,” a track about SK-47’s South London libertine lifestyle that he released on Spotify at the end of September. As a result, SK-47 has been gaining a steady stream of American fans and was recently asked by Grand Theft Auto streamer Putther, who has over one million subscribers, to make a custom theme song for his YouTube channel.

The masked musician keeps his identity anonymous, like many artists in the U.K. drill world, to protect his personal life and ensure the longevity of his career. “Personal details impact your fans in the drill scene,” explains the rapper. “If I wear a mask, it’s all about the music. And if I’m ageless, I appeal to all ages.” He wears the disguise, inspired by the DC Universe villain Deathstroke, in the video for “Streets in South,” which came out Friday.

His aim? To go viral, preferably on TikTok. “If you can go viral on TikTok, then chances are you’ll have Sony and Atlantic ringing you up, because that’s what they’re looking for these days,” he explains. SK-47 has already had some success on TikTok: His songs “Take This Risk” and “On Smoke” have accrued tens of thousands of views on the social media platform. “All it takes is the right influencer to use a song, and it takes off,” he says. “If you’ve got good visuals, it’s got more of a chance.”

U.K. drill is a subgenre of rap known for its nihilistic and dark undertones and its melodic beats. The musical style, which started in the U.S. and drifted overseas, has been sold back to the American market through TikTok. Hits from British drill artists like “Packs and Potions” by Hazey, “TikTok” by Poundz, and “Body” by Russ Williams and Tion Wayne, have racked up millions of views on the platform, launching the artists to international fame.

Although the prevalence of drill music across social media is new, the genre itself is not. “Drill migrated from Chicago to the U.K. long before this golden age of the sound,” explains British music and culture critic Nicolas-Tyrell Scott. “During the early 2010s, collectives like Skengdo and AM, 410, and more crafted the sound with distinct cadences. On top of that, the production progressively got faster and moved away from the U.S. trap foundations.”

A large part of U.K. drill’s success comes from the many enthusiasts who circulate the music on TikTok. According to T, a 17-year-old rap enthusiast from South London whose TikTok account @maybentx has 138,100 followers, young people’s appetite for drill comes down to the way Brits have evolved the genre. “We started to be a bit more authentic, brought in our own beats, and stopped trying to mimic American accents,” T says.

Zion, an 18-year-old TikToker who creates drill content — his account, @zionsapong, has 787,200 followers — agrees that the level of authenticity in U.K. drill is key. “I feel like Americans love the accent and the way that British people talk,” he says. “Not just the accent, but the artistry involved.”

Zion feels that U.K. drill’s prevalent wordplay and inside jokes — about soccer, sex, drugs, artist beef, and everything in between — are especially seductive to American ears. “It’s like a code, especially for people that have never heard it before,” says Zion, who grew up in the U.K. and now lives in California. “You have to actually sit there and listen to the lyrics to get it. That’s why I think I love it so much. It’s not easy, but it’s fun.”

Drill has not always been a genre associated with fun. The scene has caused a spate of moral panics about its supposed ties to gang-related violence in the 2010s, and the localized nature of the music — which often references events that have happened IRL — has even led to it being used as court evidence in the U.K. (Another reason why many British performers, like SK-47, wear masks to hide their identities.)

“Crime is forever in society, with or without drill. The tactics that police and courts are trying to use to demonize it happened with rap at large, too — and still do,” says Scott. “It's largely part of a wider racist mechanic.” Rap expert and academic Eithne Quinn recently has campaigned for British courts to review their use of Drill in courtrooms, due to concerns it could be preventing young Black men — who make up the majority of drill rappers — from getting a fair trial.

Although drill’s alleged connection to gangs has been disproved, with academics citing the genre’s “fact–fiction hybridity” as evidence of the ties being highly exaggerated, traces of this cultural association remain. It’s evident in the formation of drill collectives, which split artists into competing groups — something that Zion views as a driver of drill’s high engagement on TikTok.

“If you look at the U.K. drill groups, they’re always talking about each other in their songs,” Zion says. “Their fans think they’re a part of that beef, and they’ll start fighting with each other in the comment sections. It’s always about who’s better and who has the best show. The U.K. has taken that controversy to the next level.”

T plays into the competitive nature of drill’s young fans. In order to rile up his followers, he often creates videos about why U.K. drill is better than U.S. drill or posts clips where he pits U.K. and U.S. artists against each other. “In the drill world, Americans think the U.K. has stolen stuff because they created hip-hop, whereas British people say they’ve taken American music and made it their own,” he says. “I guess there’s two sides to every story.” He adds, “It feels fun to add your fuel to the fire.”

Despite the rivalry, U.S. listeners seem invested in U.K. artists — and insiders say the appeal of British rappers lies in the images they’ve cultivated through social media. T points to the artist Central Cee, a drill rapper from London, as a trailblazer. “When Central Cee came out with those color-coordinated outfits, and videos that just loop, it was mad different to what anyone had done before, in the U.K. or the U.S,” says T.

Central Cee has appeared in matched fits to drop his tracks “Obsessed With You” and “Commitment Issues” on TikTok. Combined, those songs have been used in almost 500,000 videos on the platform. “He’s made London more colorful, more friendly. He’s talking about the bad stuff,” T says, “but he’s doing it in an artful way.”

SK-47 is well aware of the importance of image in this scene, and he’s leaning into it heavily. “They want to see you with Fendi and Louis Vuitton,” he says of the fans. “That’s how they know you’ve got serious money and the star image.” The rapper tells Input he recently dropped £2,150 ($2,900) on a new Dior jacket, which he posted pictures of himself wearing to his Instagram and Snapchat. “You’re selling a serious dream to a lot of people, because fans want something to believe in.”

He says he’s playing to his most important demographic: young women. “They like the way I look, even though they can’t see my face. It’s the dress sense, the energy, the body, and the charisma on camera,” explains SK-47, who often appears shirtless in his music videos.

“If you can influence pretty girls to love your music, they’ll influence everyone else.”

The rapper feels his approach is the ultimate power play. “Teenage girls have a lot of teenage boys who follow them on social media — and if a teenage girl is into something, all the boys will follow her,” he says. “If you can influence pretty girls to love your music, they’ll influence everyone else.”

It seems these sorts of tactics are making an impression overseas. Increasingly, the New York drill scene is dominated by U.K. producers such as AXL BEATS, who has worked with Drake, and Gotcha, the producer behind U.K. drill star Tion Wayne. “It’s a symbol of mutual respect,” says T. “A lot of American artists have collaborated with London, and I feel that’s what’s helping it grow.”

It’s something that SK-47 has noticed, too. “I’ve got management companies in New York asking me to fly over,” he says. “I’ve got artists in Boston and Queens that want to collaborate with me — and I’m not reaching out to them, they’re hitting me up.”

He thinks this is just the beginning, and it’s all thanks to social media. “These different channels have helped to grow my artistry,” he says. “It’s only a matter of time before I become the next big thing.”