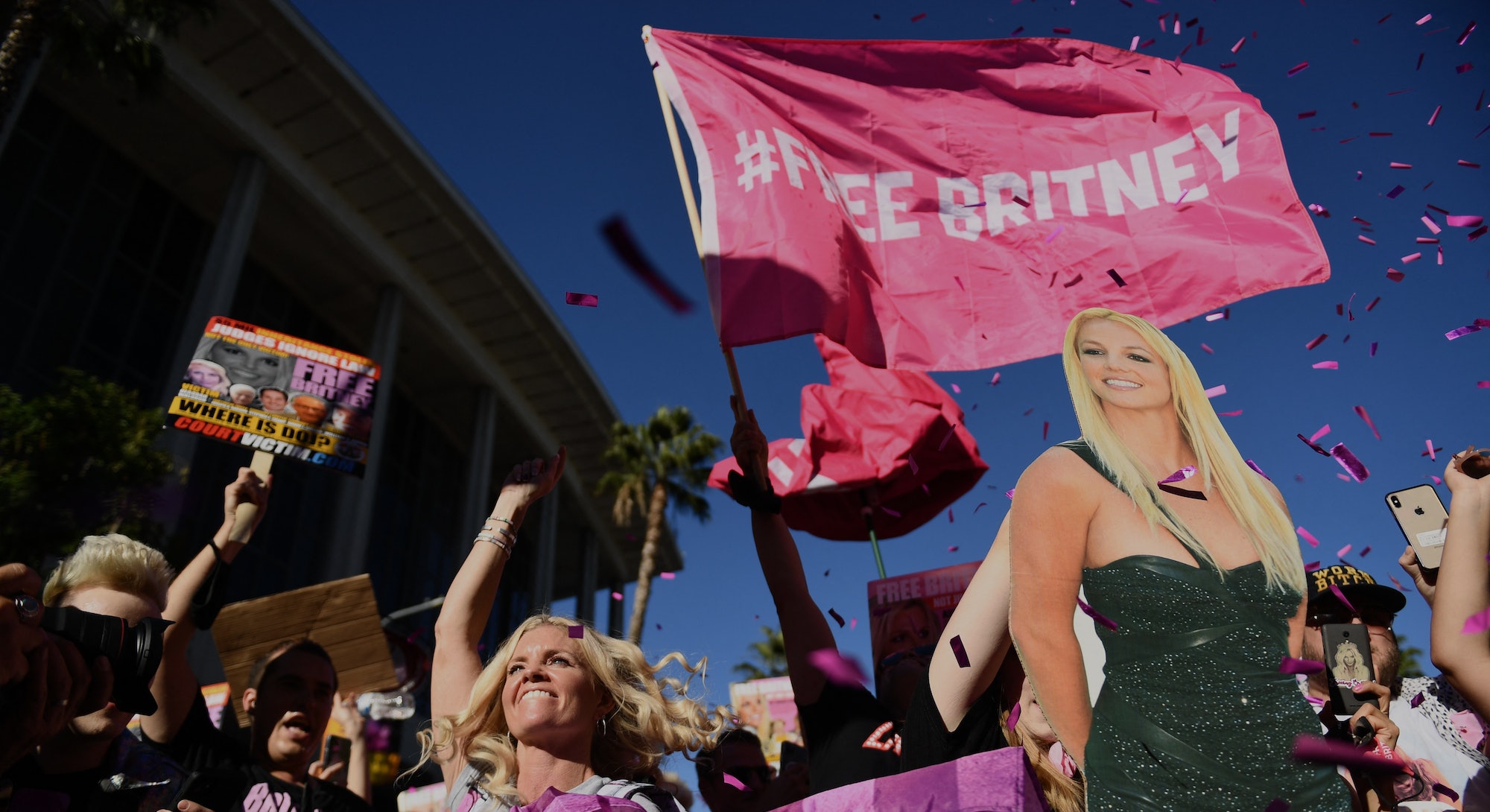 Late last week, the internet rejoiced when Britney Spears was finally freed from the conservatorship that had ruled her life for nearly 14 years.

The legal arrangement — which mandated that Spears, now 39, relinquish control over her financial, professional, and personal life to her father — had been secured after Spears was placed on an involuntary psychiatric hold in 2008.

Her fight against her conservatorship captured the public’s imagination in February, with the release of the documentary Framing Britney Spears. The buzzy doc ignited an online movement — #FreeBritney — to rescue the star from her legal confinement.

Courts grant conservatorships like Spears’ to protect individuals deemed incapable of making their own decisions. They have been an issue for the disability community for quite some time — and the problem is widespread. The National Center for State Courts estimates that 1.3 million active conservatorship cases exist across the U.S., involving a collective $50 billion in assets.

For Mia Ives-Rublee, director of the Disability Justice Initiative at the Center for American Progress in Washington, D.C., the #FreeBritney hashtag was problematic. “I noticed conversations around the issue were hyper-focused on Britney and her experiences and not really reflecting abuse within the guardianship system,” says Ives-Rublee, who is 37. “It seemed to erase the experiences of so many disabled people.”

The case also presented an opportunity. In July, Ives-Rublee created the #NotJustBritney hashtag to draw attention to the plight of disabled Americans living under restrictive conservatorships. She hoped that by supporting the #FreeBritney movement and attaching the #NotJustBritney hashtag to it, she could utilize the force of Spears’ fans to change conservatorships for good.

Ives-Rublee and other campaigners saw an opportunity to push a supported decision-making model, an alternative that would give disabled people more control over their lives. Now, however, she and many other members of the disability community are concerned the #FreeBritney campaign was less about conservatorships and more about Britney Spears.

Matthew Cortland, a lawyer and senior fellow at the left-wing think tank Data for Progress, notes how bittersweet Spears’ victory is. “Folks I follow in the online disability community have been relentless advocates for #FreeBritney and #NotJustBritney,” they say. Cortland has a disability and became a litigator to fight the widespread discrimination faced by chronically ill and disabled Americans. “It shouldn't take international superstardom and legions of relentless fans for disabled folks to get free.”

Sara Kenigsberg, a 33-year-old content director based in D.C., wants the public to recognize how important Spears’ social capital was in this case. “Obviously she is a wealthy white woman. There’s so many people that don’t have access to very expensive lawyers or media attention,” she says. Kenigsberg’s own campaigning against conservatorships stems from the time she was involuntarily hospitalized, at age 25, after being diagnosed with bipolar disorder. “I’m so happy that Britney was freed from this conservatorship,” she says. “But we need to amplify many other, more marginalized voices.”

Barbara Imle, a Ph.D. candidate at Portland State University who researches conservatorships in California, shares these concerns. Imle was radicalized during her time as a case worker for people with disabilities; it exposed her to the horrors of conservatorships. “Before the Britney case caught on fire, we never had a platform, because nobody cared,” says Imle, who has watched as many as 30 people lose their rights in a day while observing hearings. “I worry a lot of this fire and dedication will wane now that Britney’s out. It makes me sad.”

Ives-Rublee echoes Imle’s thoughts. “As a disabled woman of color, I know what happens with these really sparkly cases,” she says, comparing the #FreeBritney movement to the public’s fleeting fascination with high-profile true crime cases, like the disappearance of Gabby Petito, a white woman. “Once it’s over, [supporters] think that’s it. It leaves disabled people feeling betrayed. We had this huge movement to help this one super-famous person out of this horrific system. But nobody cares about the rest of us.”

Disability campaigners have also had to fight ableism in the #FreeBritney movement. Spears has been diagnosed with bipolar disorder, which is deemed a disability under the Americans with Disabilities Act. Despite this, many have claimed that Spears “isn’t really disabled” — suggesting that her case is somehow different in comparison to other conservatorships.

Ives-Rublee says those who negate Spears’ disability harbor common misconceptions of what it means to be disabled. “Those that think disabled people are meant to be under guardianship are speaking to the ableist structures in society,” she says. The campaigner, who was born with brittle bone disease and uses a wheelchair, has experienced this IRL. Bystanders approach her with invasive questions as she goes about her day, seemingly baffled by Ives-Rublee’s independence. “They think that disabled people need to be taken care of.”

Kenigsberg also views ableism as a driving force behind public misconceptions. “When you're using disabilities to take authority over someone, and to say that they’re not capable of taking care of themselves, that’s very problematic,” she says. “I have a disability, but that doesn’t mean I should be robbed of my own self-empowerment or self-determination.”

Imle points out how perverse this whole discourse is. “If there's no disability diagnosis, you can be free to make the worst decisions ever,” she says. “You can go to Vegas and lose all your money, or marry the wrong person. Most people are allowed to make bad choices. People with disabilities aren’t given that grace.”

Luckily, change could be on the way. In September, the Senate Judiciary Committee held a hearing called “Toxic Conservatorships: The Need for Reform” inspired by the #FreeBritney movement. California Gov. Gavin Newsom in September signed the so-called #FreeBritney bill to reform conservatorships, and Arizona’s State Legislature is currently considering a bill recognizing supported decision-making.

“I’d love to see Britney Spears provide a voice to help sustain this.”

Ives-Rublee is more skeptical. Like Cortland, she wants a system built around supported decision-making, but knows it will require continued public pressure. “I am slightly pessimistic that the #FreeBritney movement will translate into effort against conservatorships,” she says. “But we’d love to see it happen. I’d love to see Britney Spears provide a voice to help sustain this.”

It appears that may come to pass. After Input spoke to Ives-Rublee, Spears released a video via social media to celebrate her legal victory.

In it, she indicated that she wants to join the fight against conservatorships. “I’m here to be an advocate for people with real disabilities and real illnesses,” she said in what one activist described to Input as a clumsily worded but well-intentioned statement.

“I’m a very strong woman, so I can only imagine what the system has done to those people,” Spears continued. “Hopefully my story will make an impact and make some changes in the corrupt system.”