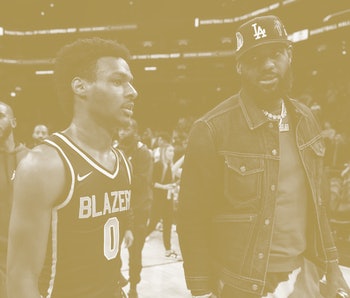 I get it, you get it, we all get it — everyone who is even marginally in the public eye will soon announce a move towards the NFT space (except for maybe Kanye West). The daily announcements by brands, celebrities, or, in some cases, regular civilians, will just be part of our foreseeable future. And now Bronny James, the oldest son of LeBron James, has decided to get into NFTs as well.

As first reported by Boardroom, the young hooper has filed a number of trademarks as part of a push towards not just the NFT world but also the worlds of gaming and fashion. Despite still being 10 months away from his 18th birthday, Bronny is already something of a high-profile figure — he plays basketball for Sierra Canyon, one of the top programs in the country, and is a member of FaZe Clan. Oh yeah, and his dad is one of the greatest basketball players to ever touch the court.

The intended use for each of these filings reads as follows:

As you can see, NFTs and cryptocurrency are mentioned many, many times.

This first step is just the tip of the iceberg, and it’s hard to say exactly how these filings will be used without more context. Maybe Bronny will be able to secure these trademarks, unlike the time his dad tried to trademark “Taco Tuesday.” (His application was denied because the phrase was “commonly used in everyday speech.”)