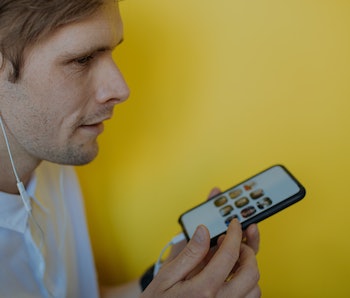 The fast-rising app Clubhouse has a growing problem with users recording and leaking conversations. The voice-only chat app is supposed to enable more intimate and free-thinking discussions than can be had through traditional social media. Major figures from Elon Musk to Drake have used the invite-only, iOS-only app to let loose and have casual conversations with fans. But if users know that conversations could be recorded and published elsewhere, they may be more cautious about what comes out of their mouths so as not to face backlash down the road.

That concern was highlighted yesterday after TMZ published a recording of a Clubhouse chat in which the comedian Tiffany Haddish is heard criticizing Nicki Minaj over apparent disrespectful behavior. The two celebrities have a history of acrimony.

After someone in the chat called Haddish the “Nicki Minaj of comedy right now,” another responded that Haddish is better than Nicki because she “shows up on time.” Haddish then chimed in with, “And unlike Nicki, I treat everybody with respect and dignity.”

Semi-private — Clubhouse rooms are public by nature, so it’s not exactly leaking in the traditional sense — anyone can tune into these conversations as they’re happening. But Clubhouse has been considered semi-private because conversations are real-time and ephemeral, meaning they aren’t recorded and so can’t be heard after the fact. People aren’t at the same risk of being canceled over something they said years prior because it disappears immediately — unless, of course, recordings become more prevalent.

Clubhouse itself prohibits recording conversations without a speaker’s permission in order to ensure a “safe space” for open conversation, but it has no way of actually preventing anyone from recording anything. No matter what technical safeguards the company puts in place, people could still record using another device. Restrictions at the iOS-level — Clubhouse is currently only available for iPhone — can complicate, but not totally eliminate, recording.

Back in February, it was discovered that a Clubhouse user had exploited its APIs to broadcast chats onto a public website. The company banned the user and implemented new measures to prevent the behavior.

Will the fun last? — Taylor Lorenz, a reporter for The New York Times, says that users on Clubhouse are “constantly” recording and leaking audio, “especially if anyone famous or noteworthy” is in the chat. Maybe easy access to celebrities will only be a thing of early Clubhouse as the app grows in popularity and celebrities learn to be careful. The app reportedly had around 10 million users as of late February, up from just two million in January. Clubhouse has been opening up its invite system to allow more people to use it.

It would also be a good idea for Clubhouse to be more transparent with users that nothing they say in the app is truly private, and remind them to speak with that assumption in mind. But it also makes the service less appealing and increases the odds of celebrities fleeing it, which could, in turn, sink it.