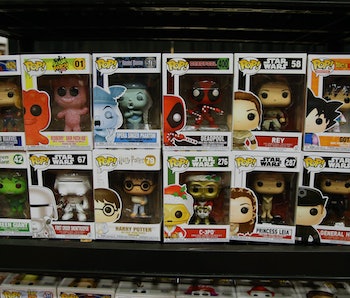 Funko, the company behind the world’s favorite pop collectibles, has acquired a majority stake in NFT company TokenWave. The early morning announcement sent Funko’s publicly traded stock up nearly 12 percent in pre-market trading. The exact financial composition of the deal has not been disclosed.

“Our strategy in this space is clear,” said CEO Brian Mariotti, “bring the value-added NFT opportunity to our licensing partners to leverage our broad range of existing pop culture content.” Mariotti has led the Funko brand since 2005.

The move is significant for Funko, a company that’s spent its entire existence creating physical products. The company says it has plans to launch its first NFTs beginning in June, with a new release every week thereafter. They’ll be sold on the Worldwide Asset eXchange (WAX), one of the most popular NFT trading sites.

As Mariotti says, this marriage really does make sense — Funko is all about licensed collectibles, and NFTs provide an opportunity for that business to expand into the digital realm. But it remains to be seen whether or not Funko’s customer base will be interested in the NFT craze.

Not only digital — For the most part, the humble NFT’s meteoric rise to infamy has been driven by consumer interest in the amorphous idea of digital scarcity. That is, after all, what defines an NFT: it’s a digital product with a verification signature.

Funko has a slightly different take in mind. The company’s digital collectibles will actually be redeemable for physical Funko Pop! vinyl figures. The company hasn’t made it clear yet whether or not every NFT it offers will come with a physical counterpart, nor has it specified how owners will be able to actually redeem the NFT.

Will this translate? — Funko’s move into NFT territory is certainly big news, and some collectors will jump at the chance to own digital Pop! figures. There’s already a huge market for the rarest of Funko’s collectibles, after all.

The NFT angle does take some of the fun out of collecting Funkos, though. Hoarding Pop! figures has always been a hobby about tangibility. Owning a .JPEG of a Minion figurine may not be as appealing to Funko’s devoted fans, especially those for whom filling a shelf with physical collectibles is part of the point. Collecting NFTs also requires a fair amount of technical preparation, which could prove to be a roadblock for physical collectors unfamiliar with NFT collection, but perhaps the bumps in that road will be smoothed out.

The ability to redeem the company’s NFTs for physical figures could serve as a middle ground for that concern, too. Those reluctant to buy a digital collector’s item might be more interested in the ability to swap the digital for physical in the future. It’s a premise that’s shown some promise in other NFT markets, like the one for sneakers.

But then again, that physical aspect could prove confusing to NFT purists. Either way, Funko will likely make a pretty penny off its new digital venture, and it’ll be an interesting experiment in pushing the limits of digital scarcity and the NFT model.