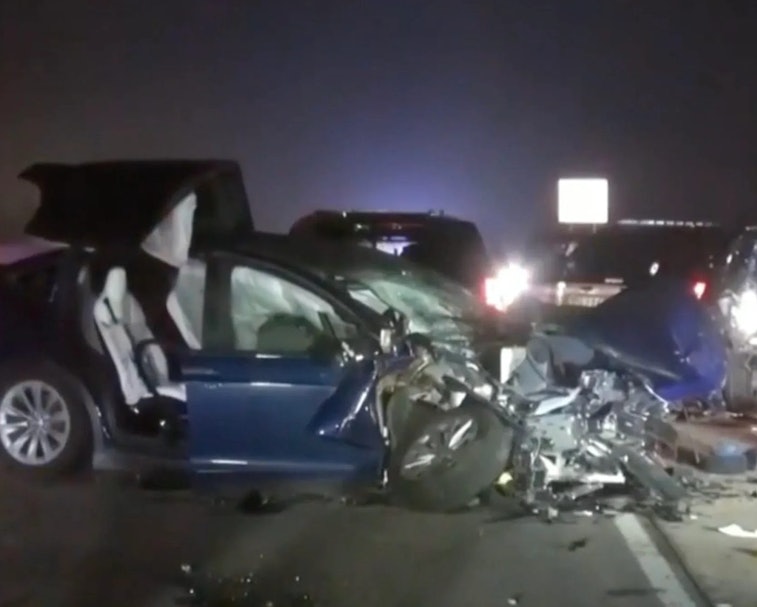 On February 27, a drunk driver behind the wheel of a Tesla Model X utilizing the car’s vastly oversold autopilot system crashed into a group of police officers engaged in a traffic stop near Splendora, Texas, resulting in numerous injuries. Now, those cops are suing Elon Musk’s company, as well as the Tex-Mex restaurant for over-serving the Tesla driver their booze.

Describing the crash as “reasonably foreseeable” and avoidable, the lawsuit seeks to “hold Tesla accountable, and force Tesla to publicly acknowledge and immediately correct the known defects inherent in its Autopilot... particularly as those impact the ongoing safety of our nation’s first responders.”

Far from the first time — The suit references the Autopilot system’s nasty habit of slamming into vehicles like cop cars, fire trucks, and ambulances after getting confused by their flashing emergency lights. Seeing as how the Autopilot feature reportedly thinks the moon is just a giant, yellow traffic light in the sky, this certainly tracks. Although we don’t think the suit has much legal standing, we’re happy to inconvenience the Technoking whenever the chance arises.

Probably not the best legal targets — As much as we’d love to see the Technoking and his shoddy EV company get their asses handed to them, it sounds somewhat unlikely that this lawsuit is the means to accomplish said goal. As Electrek points out “Autopilot is a level 2 driver-assist system and not designed to avoid every possible accident, hence why drivers need to stay attentive, which you can’t do when you are drunk,” adding that it “also simply boils down to you can’t blame Autopilot for a drunk driver.”

Musk has definitely oversold Autopilot’s capabilities for years, but at no point (to our knowledge) has he said anything akin to “You can sit back, crack a beer, and listen to the new Grimes album in one of these babies.” (Too soon?) Oh, and let’s not forget: leave the poor Tex-Mex place alone, you guys.