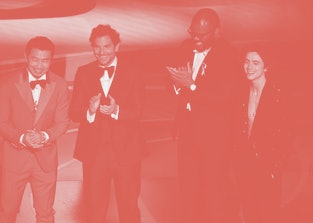 How many movies were analyzed for coughs and sneezes.

Dune may not have won Best Picture at the Oscars this year, but the exactly two coughs during its 155-minute runtime set it up for a pretty good shot at doing so. At least, that’s the premise of a faux-academic study put together by a few people at The Pudding (Mike Lacher, Jason Eppink, and Russell Goldenberg) in conjunction with the Museum of the Moving Image.

The study in question is appropriately titled: Chalamet Coughs, Dune Wins: Predicting Best Picture Winners Using Coughs and Sneezes. It’s at once an exercise in humor and the idea that data-driven insights can paint any picture, if presented under certain constraints. The abstract opens up with the following:

Many movies have coughs and sneezes in them. Some win the Academy Award for Best Picture. Is there a connection? The mainstream statistical hegemony says ‘no,’ but our research suggests otherwise.

Serving as the bedrock of the study is a dataset analyzing more than 30,000 films and parsing the number of coughs and sneezes in each. To comb this data, the authors evaluated user-created subtitles for the deaf and hearing-impaired from OpenSubtitles.org (another listed partner for the project), and then proceeded to key in on phrases like “cough” and “a-choo,” while accounting for false positives like a character using the word “cough” in a sentence.

Coughgeist — The ultimate conclusion drawn from the study was that each year’s Best Picture winner adheres to “The Coughgeist,” which is the number of coughs and sneezes that the public desires in movies.

The nominated movie that comes closest to providing the same number of coughs and sneezes as the Coughgeist tends to win Best Picture.

The authors predicted Dune would take home the crown this year as it lines up with the 2022 Coughgeist of two. Now, the study also provided some pretty huge caveats, namely exceptions to the rules it laid out, which justify the findings and adhere to the overall narrative. For example, 2020’s Best Picture winner, Parasite, far exceeded that year’s Coughgeist of three with a whopping nine expulsions. However, this exception is justified through the introduction of something called The Thriller Tripler Effect, which posits that “because audiences expect more coughs and sneezes from thrillers, we normalize their number of expulsions by dividing by three.”

I’d recommend checking out the full study because the whole thing is both engaging and actually implements a real data-collection method to push a comically absurd theory, further hammering home that data, when presented within a certain context, can be used to create any story. Like this one (per the study): “Viggo Mortensen will be cast as Batman at some point in the future.”

Congratulations to Timotheé Chalamet and Zendaya on being part of a Best Picture winner — well, in our hearts, at least. That award actually went to CODA in the end. But with six wins of its own, Dune didn’t do so bad, either.