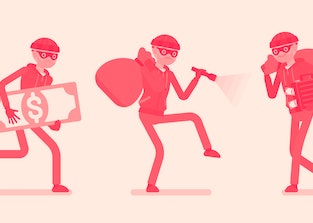 Venmo, Cash App, PayPal, and Zelle are being used with increasing frequency for money-laundering schemes related to COVID-19 relief, according to a disturbing report from NBC News. Law enforcement officials say the nature of these popular money-sending apps makes it much more difficult to trace where the money ends up.

“I’ve never seen, in my 28 years’ experience, the amount of fraud that I’ve seen currently,” said Ray Dotson, an assistant to the special agent in charge of the Secret Service.

Services like Venmo and Cash App are built around a model of super-easy money-sharing — with just a few taps you can pay your roommate for the month’s utilities or send a gift to that friend whose birthday you forgot last week. That ease-of-use model also makes these apps particularly susceptible to those who hope to use them with malicious intent.

The U.S. government has actually been hit the hardest by this latest run of laundering schemes because many of them target the Paycheck Protection Program (PPP) loans used as COVID-19 bailouts. Fraud is easier than ever in 2020 thanks to technology. Now the question is how the companies making that possible will respond to the issue.

Gaming the system — Some of this wave of laundering schemes has focused on individuals, but a fair portion of it has been directed at the government itself. Rapper Fontrell Antonio Baines, for example, has posted videos online bragging about stealing funds through the pandemic unemployment program. Though he claimed the video was for “entertainment purposes only,” he’s now facing fraud charges — carried out through a combination of fake information and money transfers via Cash App.

More gullible than usual — Other app-based schemes are targeting cash-strapped individuals. It’s no secret that money has been extremely tight for most of us since COVID-19 really took off in the U.S. back in March and lockdowns began. With the government proving to be stingier than ever, the general population has been looking for any and every opportunity to pocket some extra change.

So when a person is approached with an offer of free money on social media, for example, any red flags might be thrown aside in the pursuit of cash.

“It’s so easy for a frauster, because there are so many people that legitimately need this money,” said Detective Ricardo Pena of the Coral Springs Police Department.

What the apps have to say — Officials from Cash App, PayPal, Zelle, and Venmo all told NBC they have intense anti-fraud measures in place to ensure none of this happens. Cash App, for example, recently began using artificial intelligence to flag potential scams. Venmo and PayPal said their companies take “every instance of potential fraud very seriously.”

These measures have obviously failed in many instances to thwart the unique challenges presented by the ongoing hellscape we call 2020.