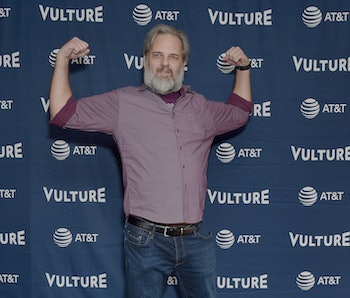 Hey, this sounds pretty fun: Dan Harmon has a new animated series on the way called Krapopolis “centered on a flawed family of humans, gods and monsters that tries to run one of the world’s first cities without killing each other.” Could be cool, right? His other shows generally make for good TV — apart from a new legion of insufferable Harmon fans, we don’t see how there could be anything to make us roll our eyes at the project before we see any sort of casting, artwork, or actual episodes...

Okay, come the hell on. What does “the first-ever animated series curated entirely on the Blockchain” even mean? Is it a cartoon someone can only watch via the Brave browser? Does everyone who stakes it get a say about what happens each new season? Will a spin-off “fork” away from Krapopolis into a new show that is pretty much the exact same thing, but with one or two minor details changed?

“Not to go too far into it today, but... Fox is going to take advertisers into the world of blockchain-powered tokens, including NFTs,” Fox Entertainment CEO Charlie Collier reportedly explained to advertisers in an online presentation. So, it’s another too-late-to-the-party NFT marketing gimmick? Got it. Well, at least Justin Roiland will do some funny voices in this one, too.

Collectible NFTs for a nonexistent show — According to a write-up earlier this week from The Hollywood Reporter, it sounds like the main thing contributing towards the Krapopolis blockchain technicality is its promotion of an online marketplace “that will curate and sell digital goods, ranging from NFTs of one-of-a-kind character and background art and GIFs, as well as tokens that provide exclusive social experiences to engage and reward superfans.”

In essence, it sounds like a lot like a venue solely for limited edition and rare collectible Krapopolis swag. We’d say that’s completely ridiculous, but... well, Dan Harmon’s fans are pretty damn diehard, so who the hell knows?

Add it to the NFT pile — Well, from the sound of things, it definitely seems like a “blockchain” cartoon is yet another shoehorned crypto-integration that can get tossed onto the mountain of ridiculous NFT projects.

Don’t get us wrong — there are some very solid reasons to support NFT marketplaces related to ethical artistic ownership and compensation... but Dan Harmon is a millionaire. He doesn’t need ridiculous amounts of crypto-wealth added to that pile. More power to anyone who wants to spend a bunch of Ethereum on a Krapopolis GIF, but as for us, we’ll probably just tune in to the show whenever it finally airs.