Delta pilot sues his employer for stealing his app idea 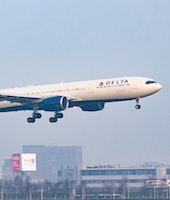 The amount of damages sought by Captain Craig Alexander, which he calls "conservative."

Captain Craig Alexander, a pilot for Delta Airlines, is suing his employer over claims of trade secrets theft after the company released an app Alexander claims is essentially identical to one he pitched them a few years earlier. Following a massive power outage in 2015 that grounded Delta planes for five hours and cost the company over $150 million, Captain Alexander reportedly reached out to CEO Ed Bastian stating he had a solution — an in-house messaging app dubbed QrewLive (clever, cap’n), which Alexander apparently sunk over $100,000 of his own money into designing.

As Alexander recounts, the pilot met with top Delta brass multiple times over the next year, with company executives initially showing a large amount of interest in the project. In the end, however, Delta decided to not greenlight the app... at least at the time. Two years’ later, however, the airline released Delta Flight Family for its employees, something that amounts to “a carbon copy, knock-off of the role-based text messaging component of Craig’s proprietary QrewLive communications platform,” claims Alexander in his suit.

What’s more, the captain has been forced to use the app for years now while piloting for the company, a “daily reminder” of Delta’s apparent douche-nozzlery. Captain Alexander is seeking over $1 billion in restitution, claiming the company has saved far more than that based on the app of his own design.

Delta sees things differently — Of course, Delta doesn’t remember things going down quite like that. “While we take the allegations specified in Mr. Alexander's complaint seriously, they are not an accurate or fair description of Delta's development of its internal crew messaging platform," a company spokesperson told Bloomberg. It seems likely that Delta will attempt to challenge the claims, arguing that a company “typically owns the rights to anything produced by its employees,” including a pilot with 11 years under his belt like Captain Alexander. Bloomberg added, “Alexander stressed that he put his own time and resources into QrewLive and said Delta indicated it would be willing to purchase the app from him on the same terms as from an outside vendor.”

In the end, we’re definitely gonna side with Captain Alexander on this one, if only because we’ve stared down too many delayed Delta flights in our own past travels. Go get ‘em, captain... and that guy who’s suing Sega, too, while we’re at it.