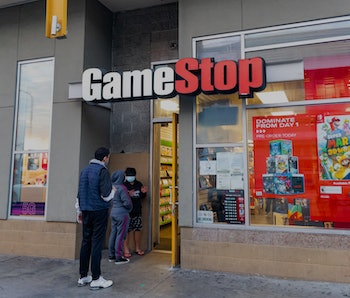 It's been a heck of a week for short-selling hedge funds and retail investors alike, with the battle between the two playing out publicly in the shape of GameStop's share price rollercoaster. Yesterday, the faceless crowd that triggered the tumult, a subreddit called r/WallStreetBets, got banned from Discord for reports of racial slurs and hateful speech, according to multiple outlets.

The swift suspension sparked a debate about censorship and the timing of the ban. Now, The Verge reports, Discord's position and tone have changed. The ban against r/WallStreetBets on Discord has been lifted, with Discord mods looking to find more effective moderation solutions to handle hateful content. One Discord staffer is reportedly also helping the forum with infrastructure issues due to the stunning flood of newcomers it's seen this week.

What Discord says now — A spokesperson for the platform told The Verge:

WallStreetBets members have set up a new server and we are working with them. We will welcome the group back so long as they improve their moderation practices and follow our Community Guidelines. We have reached out to the moderators to provide them with support and advice, like we do for many of our large communities.

What Discord said then — Yesterday, Discord said that it wasn't targeting r/WallStreetBets for financial activity but hateful speech. "The server has been on our Trust & Safety team’s radar for some time due to occasional content that violates our Community Guidelines, including hate speech, glorifying violence, and spreading misinformation. Over the past few months, we have issued multiple warnings to the server admin. Today, we decided to remove the server and its owner from Discord for continuing to allow hateful and discriminatory content after repeated warnings," a spokesperson said.

This is far from over — Moderators of r/WallStreetBets claim that the sudden influx of new users was hard to sift through case by case, but the team says it's working on blocking keywords, with more granular moderation methods to follow. The new account has almost 300,000 users, at last count. And with the turmoil in the stock markets set to continue for the foreseeable future, there's no reason to expect growth to slow.