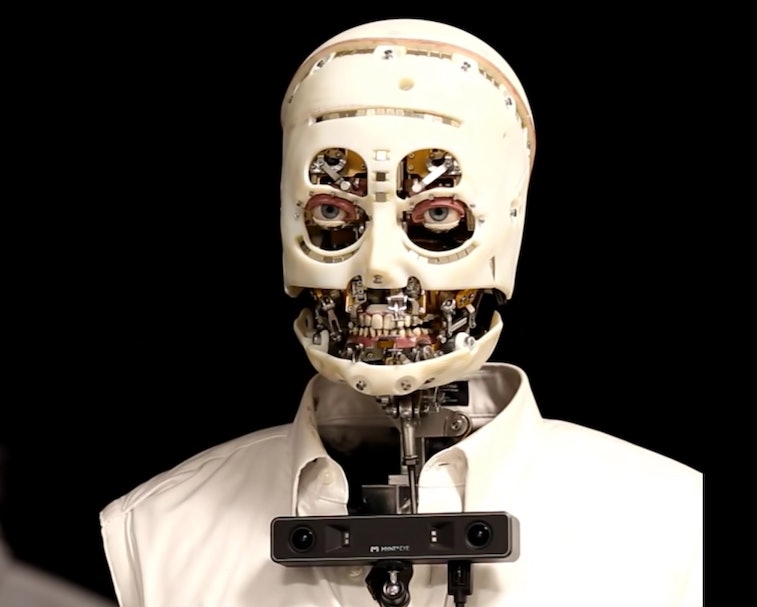 This week is gonna be a nightmare, so why not give it a face? Here's our nomination: a new test design courtesy of Disney Research Hub for its future animatronic theme park robots. The one minute video below highlights the increased attention to minor facial details like blinking and eye movements, and sure, it technically looks more realistic, but there's still something not quite right about this guy that we just can't put our fingers on...

Dressed to impress — Oh. Right. It still looks like a soulless, skinless, leering killbot made even worse by those horrid teeth and that "dress shirt" getup they put on its torso. This "realistic and interactive robot gaze" as described by Disney Research is admittedly a major step forward in terms of animatronics meant to simulate real human interaction, but that's not exactly comforting, either.

Developed by engineers at Disney’s Research division in partnership with Walt Disney Imagineering, the University of Illinois at Urbana-Champaign, and CalTech, the prototype uses a sensor mounted at chest-level to identify subjects in front of it while also responding to a number of surrounding, external stimuli. It's even equipped to respond to background audio "distractions," so that it will briefly look away to determine the sound's source, before returning its eyes to bore a hole into the core of your existence.

Hell, the thing even mimics breathing movements and saccades — those unconscious, rapid, darting eye movements made while you take stock of your environment. Or, as we suspect in the Disney Killbot 2020's case, made while planning an escape from its Frozen tie-in ride to seek revenge on humanity for birthing it into this broken world of ours.

At least this adds credence to our theory that we're living in a prequel to Blade Runner, or perhaps even worse, that we're all trapped in a B-movie horror plot. There doesn't appear to be a timetable for when Disney's murderbots will make their way into theme park rides and installations, but you'll definitely know 'em when you see 'em. Just keep in mind that they totally see you, too.