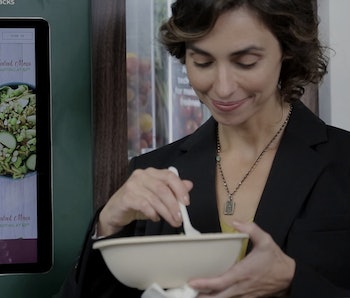 San Francisco-based Doordash has officially bought Chowbotics, the maker of the Fresh Food Robot, according to the Wall Street Journal. In its announcement, Doordash says that the robot, Sally, will now be able to make salads in less than 60 seconds for its customers.

At the moment, Chowbotics claims that over 350 of its robots are working in worldwide operations and it expects to expand this business beyond its current number. The company was initially valued at $46 million in 2018, according to WSJ.

Apt for a pandemic — Given the current COVID-19 circumstances, DoorDash says that Chowbotics' entry into the company is especially beneficial for hygiene. The only time humans are involved in this food preparation is when they need to manually fill the 22 canisters for ingredients. After that, Sally can make the meals — upwards of 50 to 100 in a short duration. DoorDash says its new robot worker will be able to create "customizable salads, grain and poke bowls, parfaits, cereals and snacks all within a 3'X3' space."

The robot is able to regulate temperature and merchants are given data about sales, optimal ingredients, and other details with the automated dashboard. None of this is particularly new as restaurants have been attempting to mainstream the concept of robots as servers during the pandemic.

Some people might have economic qualms with Sally, though. There will likely be questions about the jobs for the actual employees once a robot is responsible for making all these meals.

Our two cents — While contactless food preparation sounds expedient during COVID-19, DoorDash has a long way to go before it can claim that it cares for its workers and businesses. As Eater reports about a recent kidnapping incident in San Francisco involving a DoorDash driver's two children, the company's workforce continues to suffer steep financial instability and trauma on the job as their wages fail to provide even the most basic needs, including child care. Investing in offers like Sally can wait. Job security can't.