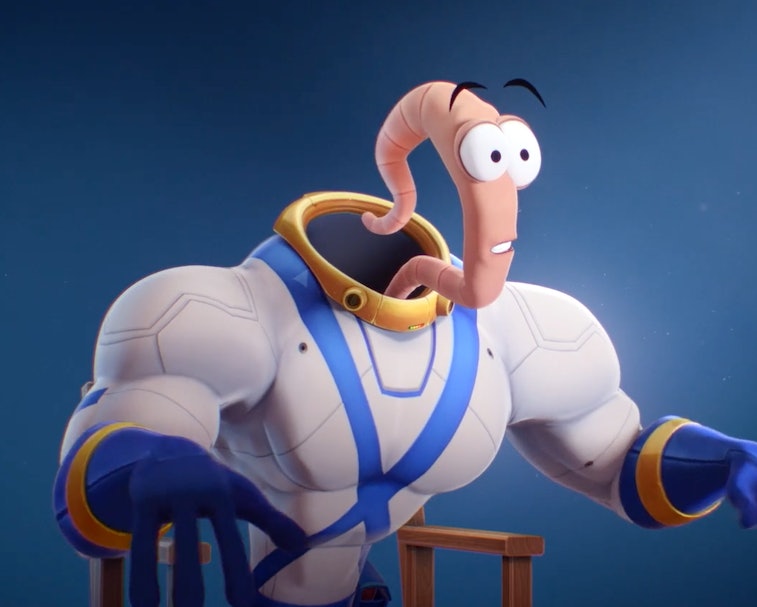 The quintessentially ‘90’s Earthworm Jim is returning sans its quintessentially ‘90’s creator, who is known for spouting various horrendously racist and queerphobic soundbites. Variety reports exclusively that the cult favorite video game character who spawned three sequels and a two-season cartoon series is coming back to the small screen courtesy of Passion Pictures animation studio and Interplay Entertainment Group, which owns the exclusive rights to the Earthworm Jim universe.

To build hype, Interplay released a brief promo video for the announcement featuring a mock interview with Earthworm Jim himself. A distributor has yet to be confirmed, although we assume that will clear up in the very near future. It remains to be seen who, exactly, this incredibly obscure bit of 90’s nostalgia is for but to hell with it — we’ll give it a shot.

Ripe for a revitalization — Created by Doug TenApel in 1994, Earthworm Jim first debuted as a 2D sidescrolling run-and-gun on the Sega Genesis, and centered on the titular invertebrate fighting anthropomorphic animal villains across a variety of sci-fi settings. In addition to the sequels and cartoon show, Earthworm Jim also showed up as a brief comic book series from Marvel alongside all kinds of toys and collectibles. The IP fell by the wayside over the past couple decades, with a fourth sequel lost for years in development hell.

Interplay’s updates on that title last year were marred by TenApel’s (most recent) godawful comments regarding BLM, queer rights, and Donald Trump on a series of podcast episodes. Taking to Twitter, the studio assured everyone that TenApel is most certainly not involved in any way on the upcoming animated series... so that’s definitely a plus.

Reboot train keeps on chugging along — Look, I’m not gonna lie, I played the first Earthworm Jim as a kid. A lot. So I’d be lying if I said I wasn’t at least somewhat curious as to what a 2022 Earthworm Jim show would entail. “I remember loving ‘Earthworm Jim’ as a kid,” Michel K. Parandi, head of Interplay’s new film and TV division, told Variety. “And there’s so much potential in this story universe: a galaxy full of animals battling for power.  Jim is an earthworm in a universe where Earth is nothing more than a myth. His struggle to find meaning is surreal and comical, but it’s also relatable.”

“I remember loving ‘Earthworm Jim’ as a kid,” pretty much sums up everyone’s thoughts on the matter, although it’s hard to see how watching a worm’s “struggle to find meaning” will truly resonate with anyone. But hey, godspeed to ‘em for trying, we suppose.